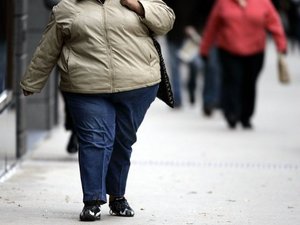 Forty-two percent of the U.S. population could be obese by 2030, up from about one-third currently, and the associated rise in health woes would likely cost $550 billion over two decades, said a study on Monday.

In real numbers, the increase would mean about 32 million more obese people, said the forecast led by researchers at Duke University in North Carolina and published in the American Journal of Preventive Medicine.

An adult with a body mass index of 30 or higher is considered obese, such as a person who is 5'9" (1.75 meters tall) and weighs over 203 pounds (92 kilograms), according to the US Centers for Disease Control and Prevention.

"Keeping obesity rates level could yield a savings of nearly $550 billion in medical expenditures over the next two decades," said lead author Eric Finkelstein in a statement ahead of the study's release at the CDC's Weight of the Nation conference in the US capital, Washington.

The study was based on data collected as part of a major US telephone survey on health by the CDC as well as figures from the Bureau of Labor Statistics and other organizations.

The number of people with severe obesity, who are an estimated 100 pounds (45 kg) overweight, or whose BMI is 40 or higher, are expected to rise to a rate of 11 percent in the United States by 2030, the study added.

This group is of particular concern because risks are highest for poor health conditions related to excess weight and absenteeism from work.

"Should these forecasts prove accurate, the adverse health and cost consequences of obesity are likely to continue to escalate without a significant intervention," said senior author Justin Trogdon of the non-profit research group RTI International.

According to CDC figures, 35.7 percent of the US population is obese, and medical costs linked to obesity in 2008 were $147 billion.