Report: Jumblat Will Ally with March 14 in Upcoming Elections 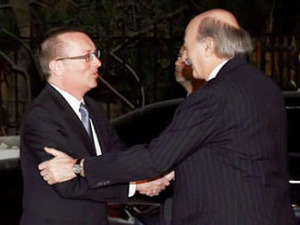 Progressive Socialist Party leader MP Walid Jumblat will enter in an alliance with the March 14 forces in the upcoming 2013 elections, As Safir newspaper reported on Wednesday.

Sources told the daily that Jumblat’s meeting with U.S. Assistant Secretary of State for Near Eastern Affairs Jeffrey Feltman during his latest visit to Beirut focused on the upcoming 2013 polls.

According to the sources, Jumblat informed Feltman about the choices the March 14-led opposition should take if it is seeking to win in the ballots.

The Druze leader insists on remaining a centrist during the elections, as he will not return to the March 14 forces and won’t be with the March 8 forces.

However, Jumblat’s meeting with Feltman ended by an agreement that he will support the March 14 forces during the elections, the sources said.

Jumblat considers that his centrist position is aimed at maintaining stability and civil peace in Lebanon.

He reiterated that he refuses the adoption of an electoral law based on proportional representation as it will have negative repercussions on his parliamentary bloc.

While I am not politically inclined to any camp in Lebanon, I do think that March 14 has lebanon at heart more than March 8 camp. Those who think that March 14 is pro Saudi are misguided, let alone flat right wrong. as lebanese, we need to say the truth even if it hurts. March 8 has been acting as if the destruction of lebanon for personal gain is permissible. lebanon is a sovreign state and its best interest before anything elas should be our main concern. we have a great country with great weather and a high level of well educated people with a system that works despite all its flaws. I am happy that jumblat is about to make a U-turn. I always thought he will because deep inside I know he cares about Lebanon and its people. Good for your Jumblat and God protect you from any harm. God bless you. we all love you.

@trueself
"I am happy that jumblat is about to make a U-turn."

He already did it when he turned against Bashar.

that is his only solution given the Chouf demographic configuration, however the question is where will he be after the elections?

Jumblat is the man he knows when to call the shots.

some are guessing where others will be after the elections, while actually the question is:
where will hizbushaitan be before the elections and his fpm dogs too after israel wipes them for good?

Relax all of you. They will all be there. Israel would have wiped out the palestinians if it could. The only thing can happen, M14 will be the majority and M8 the opposition. So you are back to square one.

M14 will sweep the next elections, the overwhelming suni vote will go for hariri, more so than 2009 given what is happening in Syria, more than 50 percent of christians, add jumblat and you know the result. You will have to use your weapons again to twist the results. Weapons in lebanon post assad will no longer be a joke though. Good luck.

Are you the same mowaten who ridiculed the theory "that Bashar planned the explosive that killed his soldiers so the UN observers would sympathize with him". You measure with two measures and you speak from two mouths.

walid beik did not leave march 14 to spin and return, he left for a mission to neutralize mach 8 and to buy time from bashar... mission accomplished, and hakim meantime, did very well in covering the vacum...the govmt of hizballah under miqati sign , is a big 0.
at the end lebanese shia would never want to live farsi way,they only want to have a comfortable size in the lebanese formula.

Jumblat doesnt have other choices.
He has to ally with a christian party in Mount Lebanon.
He cannot be with Aoun in the elections because they cannot stand each other. Therefore he has to be with the LF, i.e. M14.

Are you referring to FPM and Hezb and the like ????

Lebanese people what about the electricity Mufiose project to rob the Lebanese and government. Today's technology and the natural source in Lebanon from solar and wind is enough to light entire Lebanon, why would you allow them to launder Lebanese money to Turkey or other locations, give it to Lebanese and have individual shares investment like better than ever the region have known.

Mr President what about the electricity Mufiose project to rob the Lebanese and government. Today's technology and the natural source in Lebanon from solar and wind is enough to light entire Lebanon, why would you allow them to launder Lebanese money to Turkey or other locations, give it to Lebanese and have individual shares investment like better than ever the region have known.

M8 or M14 everytime the same thing it's just like the muppet show. Everyone is insulting the other rather than making reforms. Those guys are all expired. They haven't brought any reform for 30 years but instead the keep barking the whole time. I don't know but Lebanon won't change until new politicans gain strenght :(

Congratulations floor mats. Your Jumblat is back trampling on your and your lack of principles or dignity. kel min 3a sheklo shaksheklo

The language of assassination?

Its funny how many of us fight here to prove that his or her political party is the right one and the other should rest in damnation etc…. How misguided can get and how much longer do we want to stay there? Do you see anyone of our illustrious leaders working for a living in torn jeans and an apple on his desk for lunch? Do you see them truly making any difference to our situation in Lebanon not even the price of bread has been left alone because of these corrupt clowns. So your party gets into power and our problems are all but over? When will you stop inhaling and see that no matter who comes to power in Lebanon we will not see any positive changes be it march 8th or the 4th of July they are not looking to see a bright future for Lebanon but to fill their gullets with power under the guise that they serve their Gods first. Oh by the way incase I didn’t do my patriotic thing this morning “my God is more handsome than yours and my leader has more money than your too so there!”

Problem in Lebanon is that the majority of people are not politically affiliated to any party, however support a leader just because they are against his opponent.
Can any of you tell us in detail what he/she know about "his party's/political leader's " program?