Small Step in High Heels; a Giant Leap for Prosthetics? 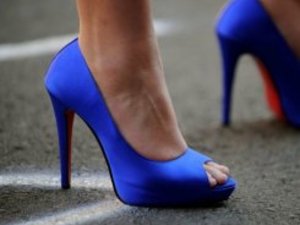 Women in stilettos and ostriches have unwittingly contributed to scientific advancement by showing researchers how to design a prosthetic leg better adapted for walking, said a study published Wednesday.

The best prosthesis for above-knee amputees, and for humanoid robots, would work nothing like the human leg, scientists found, -- but like that of an ostrich or the synthetic limbs used by South African amputee sprinter Oscar Pistorius.

"It now appears that making prosthetic feet -- for walking at least -- copying human feet too closely can be a mistake," study author Jim Usherwood of the Royal Veterinary College in London told Agence France Presse.

"If you want to make a good prosthetic foot but don't care what it looks like, you should put the motor -- in this case the ankle -- as far up the leg as possible."

Higher up, the ankle "can provide the power without making the feet heavy and hard to swing backwards and forwards," he added.

Usherwood and his team found that the human way of walking -- crashing on the heel, vaulting over the stationary leg and then pushing off with the toes, was the most economic given the shape of our foot -- a design which in some ways "does not make sense".

This walking method was "very unusual" outside the hominoidea family of apes and humans. Other bipedal animals like ostriches have no ground-striking heels, but rather extensive tendons that act as springs.

The human foot design evolved to accommodate our early survival needs to both walk and run quickly, and remained unchanged even after we lost the requirement for sprinting to catch prey or evade predators, according to the study published in the Journal of the Royal Society Interface.

The scientists observed that women in heels had to wiggle their bottoms to allow them to keep walking in the "crash, vault, push" pattern.

"The normal human foot and heel-sole-toe stance ... has the advantage that it allows those muscles powering the shove (calf) and absorbing the crash (shin) to be largely unloaded during the vault," said a statement.

"This is a benefit as muscles use energy when opposing force. But motors don't -- so prosthetics and robotics should not copy human feet."

Double amputee Pistorius, dubbed the Blade Runner, has been at the center of controversy with critics claiming his carbon fibre prosthetic legs gave him an advantage over able-bodied athletes in mixed competitions.