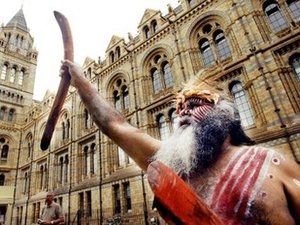 A British museum said Thursday it had agreed to return 138 sets of skeletal remains of indigenous people to Australia in what it hailed as a new approach to the delicate subject of repatriation.

London's Natural History Museum will return the remains to the Torres Strait Islands off Queensland.

Ned David, a community leader from the islands, said he was "deeply touched" by the museum's decision, which follows a long campaign by Aboriginal leaders who regard the removal of the remains as an insult to their culture.

"This decision has been received with much emotion and is considered as a breakthrough in overseas collecting institutions recognizing the importance of laying the spirits of our ancestors' to rest," David said.

The islanders hope the move will be the "first step" towards closer cooperation between the Natural History Museum and the Aboriginal community, he added, in a statement released by the museum.

Richard Lane, the museum's director of science, said most of the remains were collected in the mid-1800s, sometimes by the ship's surgeons on naval vessels or by missionaries who had traveled to Australia.

"They are precious, they are somebody's ancestors, but they are also a source of great knowledge," he told BBC radio.

"By spending more time talking to the Torres Strait Islanders, understanding what their needs are and opening their eyes to what they could learn about their ancestors and, in the process, contribute to the wider knowledge about our common origins, we can actually reach a mutually acceptable ground."