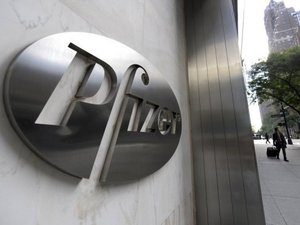 An advisory committee to the U.S. Food and Drug Administration on Wednesday urged U.S. regulators to approve a new treatment for rheumatoid arthritis made by the pharmaceutical giant Pfizer.

Tofacitinib, tsaken orally, could serve as an alternative approach to treating moderate to severe patients who did not respond to one or more traditional therapies, said the advisory committee.

By a vote of 8-2, the panel urged the drug's approval despite mixed results on its effects at different doses, and some safety concerns about the risks of cancer -- mainly lymphoma -- and infections.

If approved by the FDA, it would be the first new oral disease-modifying drug for rheumatoid arthritis (RA) in more than 10 years and the first of its kind for RA in a new class of medicines called Janus kinase (JAK) inhibitors.

Rheumatoid arthritis is a progressive autoimmune disease that causes debilitating joint pain that can lead to deformity, and affects about 1.3 million Americans and 23.7 million people worldwide, most of them women.

Exactly what causes the disease remains a mystery, and there is no known cure.

According to Herb Baraf, clinical professor of medicine at George Washington University, the safety profile of tofacitinib is very similar to that of a relatively new class of drugs known as biologics.

"It decreases joint pain and swelling. It improves a patient's sense of wellbeing. It decreases or eradicates morning stiffness," he told Agence France Presse.

"And at the 10 milligram dose it showed that it decreases the destructive nature of the arthritis. It slows down the progression of anatomic changes caused by rheumatoid arthritis."

Unlike biologics such as Humira which are injected, tofacitinib is taken in twice-daily pill form.

"To me, that is the biggest advantage," said Avram Goldberg, a rheumatologist at the North Shore-Long Island Jewish Health System.

Tofacitinib works differently than other treatments on the market because it inhibits signaling pathways inside the cells that lead to inflammation, Goldberg explained.

And since he estimates that 10-15 percent of his patients have not responded to available treatments, this may give them new hope.

"Not everybody responds to the drugs that are out there. So hopefully this will open up a new option for patients who haven't responded."

Two members of the panel voted "no" and one abstained on the question of whether the safety profile alone was adequate to support approval for the treatment of moderately to severely active RA in patients who have had inadequate response to one or more disease modifying anti-rheumatic drugs (DMARDs), such as methotrexate or leflunomide.

Those panelists said more data was needed to show whether there are safety issues over the long term.

She noted that data was presented on "approximately 4,800 tofacitinib-treated patients and one of the largest safety databases ever submitted to the FDA for a new drug application in RA."

"We believe the clinical trial results demonstrated a favorable benefit/risk profile and support the approval of tofacitinib," she added.

The FDA does not have to follow the recommendations of the advisory panel though it often does.

People who spoke during the public comment session at the FDA panel's meeting expressed support for the drug because it would offer patients another choice.

"This medication will improve the care of our patients who have severe rheumatoid arthritis," said Daniel Mandel, a doctor with the Coalition for State Rheumatology Organizations.

For Sharon Harris, a nurse who has experienced the pain of rheumatoid arthritis as part of her diagnosis of lupus, the disease caused "a paralyzing pain that literally took my breath away."

"What works for me may not work for my neighbor, and vice versa," she said.