Reduced Sleep Could Make You Fat 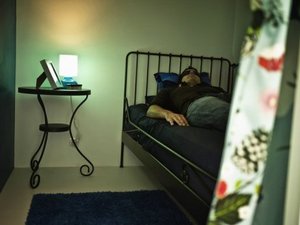 A lack of sleep could make you fat, scientists said on Thursday.

Not getting enough shut-eye may inhibit a hormone which controls hunger satisfaction and boost an appetite-stimulating hormone, said a paper presented to the European Congress on Obesity in Lyon, France.

This, in turn, could increase the sensation of hunger by 25 percent.

"If this translates to a proportional increase in calories, then a person with reduced sleep could eat 350 to 500 calories more per day," said a statement on the research led by Karine Spiegel from the University of Lyon.

A cheeseburger has about 500 calories.

The study compared data from other research projects on obesity and sleep duration. The findings are more pronounced for children and young adults.

"While it might be natural to think that sleeping less (or being awake more) means you use more calories and should therefore lose weight, studies have shown the opposite to be the case," said the statement.

"Interventions as simple as extending the nightly sleep duration in these younger, habitual short sleepers should be explored to prevent obesity."

Six hours are considered a short sleep period in adults and seven to eight hours a healthier one.