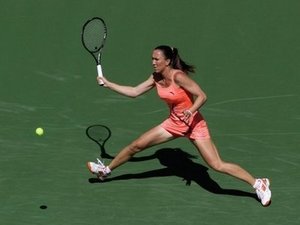 Former champions Jelena Jankovic and Kim Clijsters cruised into the third round by posting straight-set victories Friday at the WTA and ATP Masters 1000 event.

World No. 2 Clijsters, who won in 2005 and 2003, swept past Russian Alla Kudryavtseva with a dominating 6-2, 6-0 victory in the second round of the hard-court tournament.

"I was happy to be playing out on centre court," Clijsters said. "For a first match, I'm at a stage now where I haven't played for a while, and when I was playing, my last few tournaments were indoors.

"So I kind of just have to get back into playing outdoors again and big arenas, and just get a feel for it all over again."

The women's draw also includes world No. 1 Caroline Wozniacki of Denmark who lost in the final last year to Jankovic 6-2, 6-4.

Clijsters could surpass Wozniacki with a strong performance in Indian Wells. Clijsters was ranked 133rd in the world when she won in 2005.

She hit three aces, won six of nine break-point chances and won 65 percent of the total points against Kudryavtseva. Clijsters won the second set in a blistering 21 minutes.

She is trying to become the first woman since Martina Navratilova in 1990-91 to win back-to-back Indian Wells titles.

"The last couple of weeks I have been starting to feel confident in my game," Jankovic said.

"She made a lot of mistakes. I didn't really know what to expect because I only played her once before at the US Open. But I knew she had a big serve."

Jankovic moves on to the third round where she will play Julia Goerges of Germany who beat Austrian Sybille Bammer 6-1, 6-3 on Friday.

In the men's draw, Milos Raonic of Canada hammered 10 aces and used his thundering forehand to overpower Turkey's Marsel Ilhan 6-2, 7-6 (7/4) in his opening match.

"I feel good. I feel like I played a lot better today," Raonic said. "My goal is to keep getting better and improving."

He also had 140-mph and 138-mph serves in the final game of the first set but said he wasn't entirely happy with the way he was serving Friday.

"I didn't feel like I served all that well today," he said. "I have been working on improving my second serve."

Raonic hit one second serve early in the match that kicked up so high Ilhan had to use an overhead smash to get it back.

Raonic advances to the second round, where he will face American Mardy Fish, whom Raonic beat last month in the ATP Memphis semi-finals before going on to lose to Andy Roddick in the final.

"I look forward to it," Raonic said of meeting Fish again. "I feel like I am playing well from the back. If I keep this up good things will come."