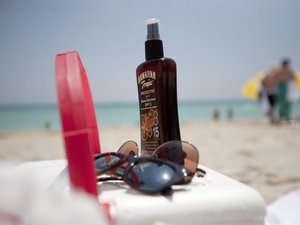 Sunscreen confusion won't be over before summer after all. The government is bowing to industry requests for more time to make clear how much protection their lotions really offer.

The Food and Drug Administration ordered changes to sunscreens last summer but gave their makers a year — until this June — to get revised bottles on the shelf.

The changes aimed to finally distinguish which brands protected against both sunburn-causing ultraviolet B rays and the deeper-penetrating ultraviolet A linked to skin cancer and premature aging. They also couldn't claim to be waterproof or sweatproof, only water- or sweat-resistant — so that people know sunscreens have to be reapplied frequently.

But sunscreen manufacturers said they were having a hard time meeting the deadline. And Friday, the FDA said it would give major sunscreen makers another six months to make the changes — until December, beyond sunbathing season in most of the country. Smaller companies will have even longer, until December 2013.

"The FDA took a major step backwards today and as a result, more consumers will likely get burned this summer," said Sen. Jack Reed, D-R.I., who had long urged the FDA to tighten its regulation of sunscreens. The regulations had been in limbo for years.

But FDA officials worried that holding companies to the original deadline might lead to a temporary shortage of some types of sunscreen this summer, spokeswoman Shelly Burgess said in an email.

Still, the FDA said companies could go ahead and put the new relabeled bottles on store shelves as soon as they're ready — and encouraged them not to waste time.

There is a mix already in stores, as some companies have found it easier to re-label certain brands and bottles than others, said Farah Ahmed of the industry's Personal Care Products Council.

But neither she nor the FDA could estimate how many of the new consumer-friendly sunscreens have made it to the market so far.

Ahmed, who chairs the council's sunscreen task force, said sunscreens aren't having to be reformulated as a result of new testing requirements from the FDA's pending rules. The real problem was the time it takes to revise package labeling, especially on smaller packages that now will have to fit extra information about just what protection is offered, she said.

So what should consumers look for today?

—You want protection against both UVA and UVB rays, explained Dr. Joshua Zeichner, a dermatologist at Mount Sinai Medical Center in New York. Once the new rules are in place, any sunscreen labeled "broad spectrum" will offer both, but until then, there's no guarantee behind that wording.

To check for UVA protection now, look on the ingredient list for any of these names: zinc, titanium, avobenzone or ecamsule. Zeichner said.

—Once the new rules are in place, sunscreens with less than an SPF of 15 or that aren't "broad spectrum" will have to carry a warning label: "This product has been shown only to help prevent sunburn, not skin cancer or early skin aging."

—Zeichner advises using a sunscreen with an SPF of 30 or higher.

—If it still says "waterproof," it was bottled under the old rules. Once the new rules are in place, the sunscreens will have to say how long they're water-resistant.

—A good rule of thumb is to apply about a shot-glass full of sunscreen and to reapply often, Zeichner said

And experts say to avoid direct sun between 10 a.m. and 4 p.m. or to cover up. Even if you're conscientious about sunscreen, it's easy to miss a spot.