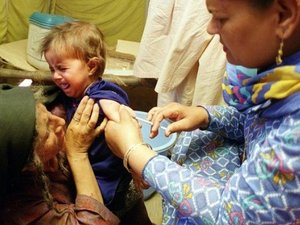 An outbreak of measles in part of Pakistan's lawless tribal northwest has killed 12 children in three weeks and is spreading due to a shortage of medicines, doctors said Monday.

Doctor Mohammad Ali Shah, chief of the main hospital in Miranshah, the biggest town in North Waziristan, told Agence France Presse that military operations, power cuts and curfews meant there was a shortage of medicines.

"For the past three weeks we are daily receiving five to 10 children suffering from measles," Shah said, adding that he would normally see only one or two deaths from the disease in a year.

"We do not have proper storage for measles vaccination because of long power outages and curfews and most of our stock expires due to these reasons."

He urged the government to send mobile vaccination teams to the area and warned of a possible typhoid outbreak if action was not taken promptly.

"Inoculation teams have not visited the area for a long time and that is the reason for the spread of such diseases," he said.

Measles is highly contagious and spread by a virus that is easily prevented by proper immunization but can be fatal.

It caused nearly 140,000 deaths worldwide in 2010, according to the World Health Organization -- 95 percent in low income countries with poor health infrastructure.

Another doctor, Mohammad Sadiq, said 12 children and a man had died from measles, and that there were up to 70 confirmed cases in hospital.