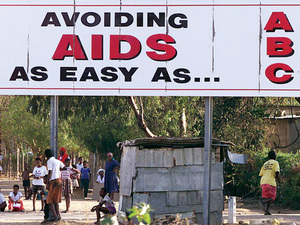 "Should I, shouldn't I?" That's the question that 31-year-old Kabo Moeti ponders as he waits outside a clinic in a Botswana village, where he's considering getting circumcised.

"I am so afraid and confused. What if something goes wrong, what if my sexual life is negatively affected?" he said in his village of Molepolole, outside the capital Gaborone.

Studies show that circumcision can reduce a man's risk of HIV infection by 60 percent, making it one of the most effective ways of preventing AIDS in a country like Botswana where one quarter of adults carry the virus.

But all the countries are lagging far behind their targets.

Three years ago Botswana launched a campaign to convince 460,000 men -- about one quarter of the national population -- to cut off their foreskins. So far, the country has reached only seven percent of this figure.

Now the government has enlisted the help of top musicians and launched a new series of advertisements touting "safe male circumcision" as a lifeline.

"The greatest challenge that we have is the fear of pain amongst men, hence we are having a low turn-out," said the campaign's coordinator Conrad Ntsuape.

"Most men seem to think the pain from the procedure might take long to heal and force them to stay away from school or work for long but we are still intensifying our education campaign," he told Agence France Presse.

Moeti shares many of those fears, and worries his sex life will suffer.

"The adverts for safe male circumcision campaign are all over and hard to ignore and so are the said benefits," said Moeti, a security guard.

"But I do hope this will not affect my sexual life as some people say one gets more safe but suffers sexually."

Botswana has no tradition of circumcision, giving the government a tough sales pitch -- even for a procedure done with local anesthetic, taking only a few minutes and requiring only a few days recovery.

"If people like him have the courage to tell the world that they are circumcised and have the belief that it's a protective measure, who am I to think otherwise?" he said.

The local artist teamed up with Zimbabwean star Oliver Mtukudzi to compose a song in English for the circumcision campaign that is being broadcast across southern Africa.

Sento said he hopes the message gets through to as many as men as possible.

"We have gone through difficult times as a nation in as far as HIV/AIDS is concerned," he said.

"There was a time when every weekend was just nothing but funerals due to deaths related to the pandemic, and I therefore hope that this campaign will be taken seriously by each and every HIV negative man," Sento said.

Health economist Alan Whiteside of the University of KwaZulu-Natal in neighbouring South Africa said many countries across the region were experiencing similar problems as Botswana.

"The problem is not so much that people don't want to embrace circumcision, it is because sometimes the programmes are implemented without the necessary ground work and community participation," Whiteside said.

In the end, Moeti decided to take the plunge. Botswana hopes more than 400,000 others will follow.