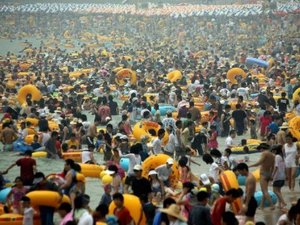 The spiraling global population and over-consumption are threatening the future health of the planet, conservation group WWF warned on Tuesday.

The demand on natural resources has become unsustainable and is putting "tremendous" pressure on the planet's biodiversity, the body said.

In its latest survey of the Earth's health, WWF named Qatar as the country with the largest ecological footprint, followed by its Middle Eastern neighbors Kuwait and the United Arab Emirates.

Denmark and the United States made up the remaining top five, calculated by comparing the renewable resources consumed against the earth's regenerative capacity.

The Living Planet Report found that high-income countries have an ecological footprint on average five times that of low-income ones.

Across the globe the footprint has doubled since 1966.

"We are living as if we have an extra planet at our disposal," said Jim Leape, WWF International director general.

"We are using 50 percent more resources that the Earth can sustainably produce and unless we change course, that number will grow fast -- by 2030 even two planets will not be enough."

The survey, compiled every two years, reported an average 30 percent decrease in biodiversity since 1970, rising to 60 percent in the hardest-hit tropical regions.

The decline has been most rapid in lower income countries, "demonstrating how the poorest and most vulnerable nations are subsidizing the lifestyles of wealthier countries," said WWF.

Globally, around 13 million hectares of forest were lost each year between 2000 and 2010.

"An ever-growing demand for resources by a growing population is putting tremendous pressures on our planet's biodiversity and is threatening our future security, health and well-being," said the group.

The report comes ahead of June's Rio+20 gathering, the fourth major summit on sustainable development since 1972.

French President-elect Francois Hollande have confirmed they will be among 100 global leaders at the summit seeking to outline a path towards an economy that can balance economic growth, poverty eradication and protection of the environment.

The WWF wants to see more efficient production systems that would reduce human demand for land, water and energy and a change in governmental policy that would measure a country's success beyond its GDP figure.

But the immediate focus must be on drastically shrinking the ecological footprint of high-income countries, particularly their carbon footprint, the WWF said.

"Rio+20 can and must be the moment for governments to set a new course towards sustainability," said Leape.

"This report is like a planetary check-up and the results indicate we have a very sick planet, said Jonathan Baillie, conservation program director of the Zoological Society of London, which co-produced the report along with the Global Footprint Network.