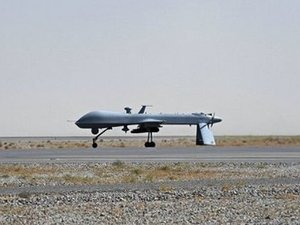 At least three militants died Monday in a U.S. strike on a vehicle in a tribal town in northwestern Pakistan near the Afghan border, security officials said.

The drone fired two missiles on a suspect vehicle and initial reports suggest three militants were killed, according to a security official, requesting anonymity.

Another official confirmed the attack and said it took place about 10 kilometers east of Miranshah, the main town in North Waziristan, a region infested by Taliban and al-Qaida linked militants.

The deeply unpopular covert U.S. drone campaign, which operates with the tacit consent of Pakistani officials, has been ramped up recently as the missiles target insurgents believed to be hiding in the lawless border regions.

Missile attacks doubled in the area last year as the covert campaign was stepped up, with more than 100 drone strikes killing over 670 people in 2010 compared with 45 strikes that killed 420 in 2009, according to an Agence France Presse tally.

Despite pressure from Washington, Pakistan has stalled on launching such an offensive in North Waziristan, saying its troops are already overstretched.

On Sunday a U.S. drone attack killed six militants near the Afghan border.

The United States does not confirm drone attacks, but its military and the Central Intelligence Agency (CIA) operating in Afghanistan are the only forces that deploy them in the region.

The missile strikes cause widespread resentment among the Pakistani public, who see military action on their soil as a breach of national sovereignty.

U.S. officials say Pakistan-based militants are helping to escalate the war in Afghanistan, putting up a deadly fight against 140,000 U.S.-led NATO troops there and seeking to bring down the Western-backed government in Kabul.