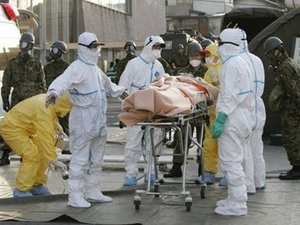 The primary containment vessel at the quake-damaged Fukushima nuclear plant in Japan was not damaged in an explosion there Monday, the U.N. atomic watchdog IAEA said.

"Japan’s Nuclear and Industrial Safety Agency (NISA) has provided the IAEA with further information about the hydrogen explosion that occurred today at the Unit 3 reactor at the Fukushima Daiichi nuclear plant," the International Atomic Energy Agency said in a statement.

"The reactor building exploded but the primary containment vessel was not damaged. The control room of unit 3 remains operational."

All personnel at the site were accounted for and six people were injured, the Vienna-based IAEA said.

An explosion shook the Fukushima nuclear power plant Monday, injuring six people, but officials said the reactor container was not breached and there was no major rise in radiation.

The blast was caused by a build-up of hydrogen in the building around the No. 3 reactor at the Fukushima Number One plant, said chief government spokesman Yukio Edano.

A similar explosion hit the building containing the No. 1 reactor at the plant on Saturday, the day after a devastating earthquake and tsunami struck a large swathe of the country's Pacific coast north of Tokyo.

The number one and three reactors at the same plant have experienced the same problem, followed by explosions in the buildings surrounding those reactors in the wake of Friday's 8.9-magnitude quake and devastating tsunami.

Officials at TEPCO were not immediately available to comment.

The plant is located 250 kilometers north of Tokyo.

Earlier, the IAEA had said that radiation levels at Fukushima were "normal".

"Radiation dose rate measurements observed at four locations around the plant's perimeter over a 16-hour period on 13 March were all normal," it said.

All four reactors at Fukushima, which were automatically shut down on March 11, "have off-site power and water levels in all units are stable," the IAEA said.

"Though preparations have been made to do so, there has been no venting to control pressure at any of the plant's units."

At unit 1, plant operators had been able to restore a residual heat remover system, "which is now being used to cool the reactor. Work is in progress to achieve a cold shutdown of the reactor," the IAEA said.

"Workers at units 2 and 4 are working to restore residual heat removal systems. Unit 3 is in a safe, cold shutdown."

The IAEA said it was continuing to liaise with the Japanese authorities and was monitoring the situation "as it evolves."

IAEA chief Yukiya Amano is scheduled to give a news conference about the situation at Japan's nuclear plants at 5:30 pm (1630 GMT) at the watchdog's Vienna headquarters.

More than 180,000 people have evacuated the area in recent days, and up to 160 may have been exposed to radiation — pouring misery onto those already devastated by the twin disasters.

While Japan has aggressively prepared for years for major earthquakes, reinforcing buildings and running drills, the impact of the tsunami — which came so quickly that not many people managed to flee to higher ground — was severe.

Officials in one devastated town said they were running out of body bags.