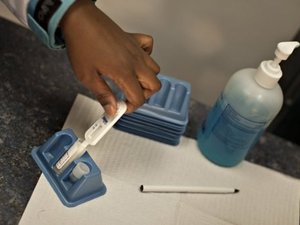 A panel of experts on Tuesday urged U.S. regulators to allow an over-the-counter version of a test that could allow people to test themselves at home for human immunodeficiency virus (HIV).

The Blood Products Advisory Committee voted unanimously, 17-0, that the OraQuick In-Home Test was safe and effective and that any benefits outweighed the potential risks of use.

The U.S. Food and Drug Administration does not have to follow the advice of the expert panel, thought it usually does.

The test, manufactured by the company OraSure, was approved by the FDA in 2004 for use by health professionals.

It requires a swab around the outer gum area and uses oral fluid to test for HIV, which is not the same as saliva.

Results come back in about 20 minutes, but should be confirmed by a blood test which is considered more accurate.

Close to 5,700 people took the in-home test according to company data presented to the advisory panel.

Of those, 114 people received positive tests, and 106 were confirmed to be true positives, meaning the test had a 93 percent accuracy rate for positive tests.

Negative results were accurate 99.8 percent of the time, the company said.