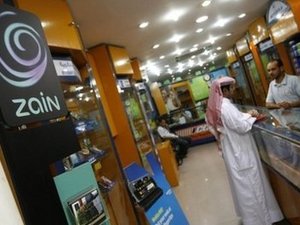 Kuwaiti telecommunications firm Zain has tentatively accepted a $950 million bid for its Saudi operations, the division's joint suitors said Monday in a deal that could lead to further consolidation for the Mideast's mobile service providers.

Saudi billionaire Prince Alwaleed bin Talal's Kingdom Holding Co. said in a regulatory filing that it and bid partner Batelco Group of Bahrain received "preliminary acceptance" for their non-binding offer from Zain's board. Completing the deal is expected to take weeks.

The acquisition will likely help move forward a far larger merger push involving Zain itself launched by Emirati telecom Etisalat. That $12 billion effort has dragged on for months and is complicated by Zain's ownership of the Saudi stake.

KHC teamed up with Batelco to pursue the Saudi deal Sunday. They had previously made bids separately, but those offers were unsuccessful.

The companies said they offered $950 million in cash for Kuwaiti Zain's 25 percent stake in the Saudi unit that bears its name. The other 75 percent of Zain Saudi Arabia is split between public and private shareholders.

Alwaleed called the offer reasonable for all parties, and suggested the deal was the start of a broader push into the voice and data industry.

Alwaleed is best known for his large investments in Western multinationals, including Citigroup Inc. and News Corp.

Bahrain's government, which is facing stiff and prolonged opposition from anti-government protesters, owns more than half of Batelco. The company provides telecom services under its name in the island kingdom and Egypt, and owns stakes in five other telecom firms in the Mideast and India.

The companies said their joint bid for Zain Saudi Arabia is subject to due diligence, which involves combing through Zain Saudi Arabia's books. They estimate the process could take at least six weeks. If satisfied with what they find, they plan to submit a binding offer by May 2011, Batelco CEO Peter Kaliaropoulos said.

The bid doesn't include the assumption of $3.8 billion in Saudi Zain's debt. It is unclear how those liabilities would be handled if the acquisition is successful.

Zain has been seeking a buyer for its Saudi division as part of a $12 billion offer for a 46 percent stake of the parent company from Abu Dhabi-based Etisalat, which that has pursued rapid growth abroad after losing its monopoly at home. Zain must dispose of its Saudi stake to satisfy regulators because Etisalat already has a stake in mobile operations in the kingdom.