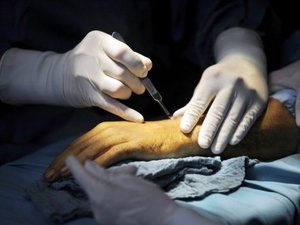 For the first time, U.S. surgeons have used a new type of operation called nerve transfer to restore hand function in a patient who was paralyzed by a neck injury, said a study published Tuesday.

The breakthrough surgery worked by taking a non-functional nerve that controls pinching the forefinger and thumb and plugging it into a functioning nerve in the man's upper arm which had been used for bending his elbow.

After many months of intensive physical therapy, the 71-year-old patient -- who was paralyzed from the waist down and lost the use of his hands in a car accident -- can now feed himself and even write with some assistance, according to the study in the Journal of Neurosurgery.

"This is not a particularly expensive or overly complex surgery," said senior author Susan Mackinnon, who developed and performed the surgery.

"It's not a hand or a face transplant, for example. It's something we would like other surgeons around the country to do," said Mackinnon, chief of the Division of Plastic and Reconstructive Surgery at Washington University School of Medicine.

The patient's injury was in the lowest bone in his neck, known as the C7 vertebra.

Patients with injured C7 and C6 vertebra have no hand function and are considered quadriplegic, though they can often move their shoulders, elbows and wrists because those nerves attach to the spinal cord above the injury site.

For people who are injured higher up along the neck, from the C5 to C1 vertebra, such an operation would not likely be successful in restoring hand and arm function, doctors said.

"This procedure is unusual for treating quadriplegia because we do not attempt to go back into the spinal cord where the injury is," said surgeon Ida Fox, assistant professor of plastic and reconstructive surgery at Washington University.

"Instead, we go out to where we know things work -- in this case the elbow -- so that we can borrow nerves there and reroute them to give hand function."

Surgeons were encouraged by the patient's progress, even though the operation was done two years after the car accident.

Still, it took eight months of therapy after the surgery for the patient to be able to move the thumb, index and middle fingers of his left hand. Two months later, he was able to similarly move his right hand.

According to Lewis Lane, chief of hand surgery at North Shore University Hospital in New York, the case study "gives hope that some injured individuals with the proper circumstances might also benefit from comparable treatment."

"One element that is unusual in this case is success in a 71 year old, because older individuals typically have much lower nerve and regenerative potential," added Lane, who was not involved with the research.

Some 12,000 people sustain spinal cord injuries each year in the United States.