March 14 Thanks its Supporters: You Were Victorious against Arms’ Oppression and Intimidation 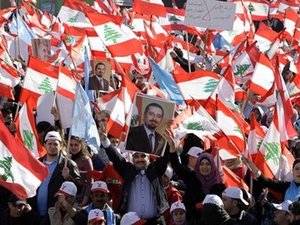 The March 14 General Secretariat voiced on Monday its appreciation and gratitude for the Lebanese people “who renewed their revolution aimed at achieving sovereignty, freedom, independence, and justice.”

It said in a statement: “Your commitment to these goals and your peaceful civil action has become the example adopted by Arab people in their revolts.”

“On Sunday, you were victorious against the weapons’ oppression and the policy of intimidation and terrorization,” it added.

“Lebanon after March 14, 2011 will not be the same as it was before it,” the general secretariat stressed.

“With the renewal of the Lebanese revolution, we vow to remain up to you expectations without making any concessions over them,” the statement continued.

Hundreds of thousands of March 14 supporters gathered at Beirut's Martyrs Square on Sunday at a rally aimed at sending a message to the Hizbullah-led alliance about the people's rejection of the party's weapons.