Geagea Hopes Miqati Would Pay Attention to More than Half of Lebanese: Suleiman is Listening 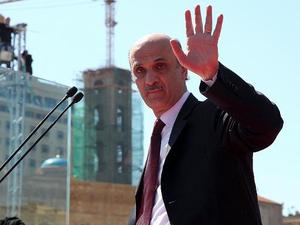 He criticized during a press conference after meeting with Deputy Speaker Farid Makari and MP Farid Habib “attempts by the other camp to belittle yesterday’s events.”

“Sunday’s rally will remain a major national occasion in Lebanon’s political life for decades to come,” he added.

“More than half of the Lebanese headed down to Martyrs Square to announce their position from the Special Tribunal for Lebanon and the illegitimate arms and therefore those who should listen to the people should pay attention to them because some sides in Lebanon no longer hear,” Geagea noted.

President Suleiman is among the officials “who pay a lot of attention”, hoping that Miqati would take into consideration what happened at Sunday’s rally, he continued.

Meanwhile, the Lebanese Forces press office published a statement on Monday thanking the Lebanese for heading down to the rally and praising them for maintaining the peace in their demonstration.

Geagea also held talks on Monday with U.N. Special Coordinator for Lebanon Michael Williams who praised the March 13 rally, saying it was a good reflection of the developing democracy that is prospering in the Middle East, and Lebanon in particular.

Dialogue remains the best way to solve all problems regardless of how sensitive they may be and no matter how great the dispute, he noted.

He informed Geagea of the U.N.’s hope that the new Lebanese government would meet the expectations of all the Lebanese, without exception, and that it would respect its international obligations.

He addressed March 14 supporters gathered at Martyrs Square saying: "We only want the Lebanese state to govern; we won't rest until the state within the state concept vanishes and the state is established."

The LF leader reiterated to the crowds gathered at the square "we are seriously attempting to get the Lebanese out of the swamp … we are attempting to restore life back to normal."

Geagea reassured the Lebanese that the blood of March 14 martyrs will not be wasted, saying "the tribunal, since its establishment, has suffered violent attacks even before it began to show results, in a desperate attempt to stop its work."

"Yes to the state alone resisting for all the Lebanese," he said.