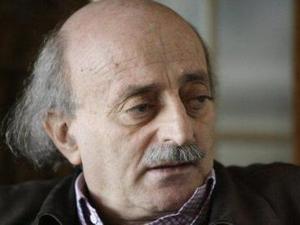 Progressive Socialist Party leader MP Walid Jumblat on Monday noted that "forming the new cabinet is the best way to confront social and economic challenges" in the country.

After talks with a high-ranking Hizbullah delegation at his residence in the Beirut neighborhood of Clemenceau, Jumblat added: "I'm surprised that some are speaking of impossibilities as the Shebaa Farms are still occupied (by Israel), as well as the Kfarshouba Hills and the Ghajar village."

"The so-called international community is doing nothing to return them to Lebanon," Jumblat went on to say.

At a mass rally commemorating the 6th anniversary of the Cedar Revolution on Sunday, caretaker premier Saad Hariri said "it is impossible that any of us here accept tutelage over Lebanon again, whether foreign domination or the domination of arms within Lebanon working for foreign interests."

"It is impossible to accept that these weapons ... continue to be turned against the democratic will of the people," Hariri added.

Jumblat reminded Hariri that he is "the son of (slain premier) Rafik Hariri, with whom we had defined the major national principles that distinguish between the enemy and the friend, call for a special relation with Syria and highlight the need to immunize Lebanon."

"Sheikh Rafik Hariri was the one behind the April 1996 (ceasefire) agreement (between Lebanon and Israel), because there are constants, not impossibilities."

As he declined to comment on the speeches delivered during Sunday's rally, Jumblat went on to say: "Sheikh Saad must endorse the constants, as amidst the toughest of crises we had chosen to prevent civil strife."

"We had also accomplished reconciliation in Mount Lebanon in cooperation with Maronite Patriarch Nasrallah Sfeir, which is as important as the reconciliation with the brothers and comrades in Hizbullah, after performing self-criticism on May 11, 2008" following the infamous May 7 clashes.

"I would've liked to hear a courageous voice" during yesterday's rally, Jumblat added, calling on the rival March 8 and March 14 camps to "return to principles and dialogue."

Earlier, Jumblat saluted the residents of Mount Lebanon for not participating in Sunday's rally and their "complete understanding of our political positions that protect peace and internal stability."

In his weekly column in his party's mouthpiece Al-Anbaa magazine, Jumblat said: "If some sides criticize us for setting stability as a priority over all else in order to avert strife, we say that this choice is a product of convictions we have followed during the hardest periods of division."

"These convictions have been deepened after a self assessment of all our political positions from the beginning of the division and culminating in the May 2008 government decisions," he added.

"We have and still look forward to the time when we see all political leaders revise their choices and actions in order to pave the way for trust after which we can solve all our problems instead of remaining in this atmosphere of incitement," he noted.

"We fear strife and have worked to end it … but unfortunately some sides are continuing on increasing the tensions through statements of incitement that pave the way for strife that only serve Israel's interest," the MP stressed.

Addressing the criticism against the possession of arms outside the state's authority, Jumblat said: "No one wants to use arms on the internal scene because it will destroy national unity and all the achievements that followed the Taef Accord."

"Everyone knows that the foreign parties that claim that they are keen on the rise of the Lebanese state in fact support Israel and its daily violations against Lebanon," he continued.

He renewed his rejection of the use of arms domestically, adding that there is a need to acquire "all elements of strength in confronting Israel."

The PSP leader called for re-launching national dialogue in order to devise a defense strategy that would protect Lebanon.

He also called for integrating Hizbullah's arms with those of the Lebanese army "under the suitable conditions."