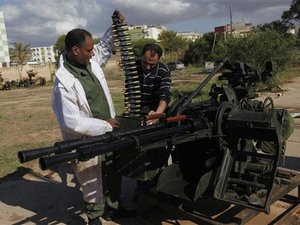 Lebanon's U.N. Ambassador Nawaf Salam, who called for a Security Council meeting on imposing a no-fly zone over Libya, vowed to protect civilians in the country “as swiftly as possible.”

Lebanon is the only Arab nation on the 15-member council.

"Unfortunately, I am relatively pessimistic about the situation on the ground," said Salam on Monday.

"We would like the council to act as swiftly as possible and would like consensus on the no-fly zone," he told reporters in New York after the meeting.

"It's not only the matter of rebels," he said of the Libyan government's military action. "There are hundreds of thousands of people under fire from (Moammar) Gadhafi's planes or mortar shells. So our message to them is that we are going to do our utmost to protect the civilian populations in Libya as swiftly as possible."

Salam said he expects some questions from council members to be answered in the draft resolution, which Lebanon is now working on with the British and French.

The swift approval that Salam is seeking is unlikely because of questions raised by Russia and other council members.(AP-AFP-Naharnet)