March 14 Sources: Next Step after Sunday Rally is to Form National Council 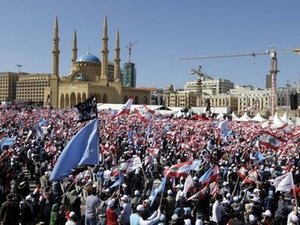 The main objective of the March 14 coalition after Sunday’s rally was to establish a National Council and consolidate its parliamentary bloc, the alliance’s sources told An Nahar daily in remarks published Tuesday.

According to the sources, the current objective is: “Accomplishing what they (March 14) had vowed in the Bristol document, forming a National Council that expresses the diversity (of the coalition), in addition to finding ways for the civil society … to function.”

The sources also said that the March 14 forces should work on organizing the alliance’s general structure and “consolidating its parliamentary bloc’s role in parliament.”

The Central News Agency said Monday that the March 14 leaders could meet in the next few days to draw the roadmap for the next stage.

The agency said March 8 could in its turn hold a large demonstration to counter the rally held by March 14 at Beirut’s Martyrs Square.