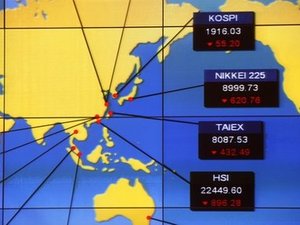 Japan's Nikkei stock index nose-dived nearly 11 percent Tuesday as the earthquake-shattered country faced an unfolding nuclear crisis after a radiation leak was detected at a crippled power plant and residents were warned to stay indoors. Panic-selling sent shares lower across the globe.

The benchmark Nikkei 225 stock average sank a staggering 10.6 percent — more than 1,000 points — to close at 8,605.15 after hitting a midday low of 8,227.63 points, more than 14 percent down. The broader Topix, meanwhile, lost 8 percent. Oil prices fell below $100 a barrel, and Asian shares tanked amid fears that Japan's nuclear emergency would worsen.

In Japan, the Nikkei's losses followed a 6 percent tumble Monday — the first trading day since a devastating earthquake and tsunami struck the northeastern coast, washing away towns and likely killing more than 10,000 people. Losses on Monday and Tuesday have sent the Nikkei spiraling downward 20 percent since the beginning of the year.

Other Asian markets plunged as large Japanese investors such as insurance companies and hedge funds pulled money from overseas, according to Tom Kaan, head of equity sales at Louis Capital Markets in Hong Kong.

Investors felt the biggest shock waves when Japan's prime minister announced that radioactive material had leaked from the Fukushima Dai-ichi nuclear plant in Fukushima province and that more leaks were possible. People living within 19 miles (30 kilometers) of the complex were told to stay indoors.

"There is also fear of contamination. We've never had three nuclear power plants blowing up one after the other," Kaan said. "When you have a situation like that, everyone takes to the extreme of being conservative. How far will it affect the air that we breath and how far will the contamination go? Is it going to reach Korea or China? That's anyone's guess."

Kaan said the Middle East crisis was still far from over and had the potential to further damage markets, oil prices, and the global economic recovery — especially if the political turmoil and violence that has hit countries like Egypt and Libya spreads to oil powerhouse Saudi Arabia.

Car makers declined partly because quake-stricken northeastern Japan is a major center for auto production, complete with a myriad of parts suppliers and a network of roads and ports for efficient distribution.

Toyota Motor Corp. said it would suspend manufacturing at its domestic plants through Wednesday — a production loss of 40,000 cars. Other manufacturers like Sony Corp. and Honda Motor Co. were also forced to halt production. Damage to roads and distribution systems made it all but impossible to move products.

High-tech suppliers like Elpida Memory Inc., the world's No. 3 maker of computer-memory chips and a leading manufacturer of DRAM, slid 9.7 percent.

Ports were closed, steel plants stopped producing, and the country was being urged to conserve power. With manufacturing all but paralyzed, exporters were also hammered — Panasonic Corp. was down 11.2 percent, Sharp Corp. slid 8.5 percent, and Sony Corp. lost 8.9 percent.

Fears about the safety of nuclear power weighed on the shares of companies involved in uranium mining. Energy Resources of Australia Ltd., one of the world's largest uranium producers, fell 14.3 percent in Sydney.

Even the rare stocks that did well Monday — industrial and materials companies, which gained due to expectations that they would benefit when Japan rebuilds — tumbled Tuesday.

"This will impact transportation of China's exports to Japan," said Peng Yunliang, a Shanghai-based analyst. "Everything is down because the market is worried about nuclear radiation. The market is worried that it may impact other regions, such as the Asia-Pacific region."

On Wall Street Monday, concerns over the economic impact of the earthquake and tsunami in Japan led to a broad sell-off. The Dow Jones industrial average lost 51.24, or 0.4 percent, to 11,993.16.

Benchmark crude for April delivery dropped $1.43 to $99.76 a barrel in electronic trading on the New York Mercantile exchange. The contract added 3 cents to settle at $101.19 on Monday.

The dollar was worth 81.55 Japanese yen Tuesday, down from 81.88 yen late Friday. A major natural disaster like an earthquake can bolster the yen because investors expect the Japanese public and insurance companies to buy back their home currency in order to fund the country's reconstruction, increasing demand for the yen.