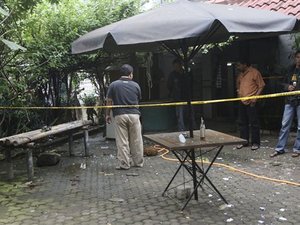 A bomb exploded at the office of a moderate Islamic group in the Indonesian capital Jakarta on Tuesday, injuring four people including a policeman, police and a witness said.

The device was in a package sent to the office of the Liberal Islam Network, a grouping of religious intellectuals, in East Jakarta, national police spokesman Boy Rafli Amar told reporters.

"We suspected that it was a bomb. Our officers were trying to tame it when it went off," he said, adding that the police are investigating the motive.

"Our office received a suspicious package containing cables with a strong smell. We called the police," Fia Anwar said.

"As the police were checking the package, it exploded. Four people were injured, including a policeman and our security guards," she added.

"I saw clearly that a policeman's hand was cut off and our security guards had shrapnel wounds," she said.

Religion has been under the spotlight in recent weeks in Indonesia, the world's most populous Muslim country, after some provincial administrations issued a local decree which banned members of the Islamic Ahmadiyah sect from showing signs identifying their mosques and schools.

"Recent violence against minority communities and new local regulations restricting religious freedom are damaging Indonesia’s international reputation as a democracy with a tradition of tolerance," a U.S. embassy statement said earlier this month.

"As a friend of Indonesia, and as a partner in the G20 and other international organizations, we support the overwhelming majority of Indonesians who abhor religious violence and support tolerance," it said.

"Laws should protect citizens from violence rather than restrict their rights."

Human rights activists say President Susilo Bambang Yudhoyono has repeatedly failed to tackle sources of intolerance in the country of 240 million people, 80 percent of whom are Muslims.

Indonesia's constitution guarantees freedom of religion but rights groups say violence against minorities including Christians and Ahmadis has been escalating since 2008.