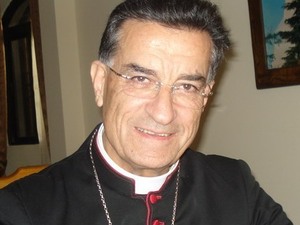 Archbishop of Jbeil Beshara al-Rahi was on Tuesday elected the 77th Patriarch of Antioch for the Maronites to succeed Nasrallah Sfeir, Monsignor Youssef Toq announced from the seat of the church in Bkirki.

The election of al-Rahi, 71, will be celebrated during a mass on Friday, March 25 at 10:30 am on the feast of the Annunciation (eid al-beshara), Toq said.

Maronite churches across Lebanon tolled bells from 12:00 pm till 12:30 pm upon the request of Bkirki’s secretariat.

Al-Rahi said after his election that Sfeir is the “permanent patriarch” and vowed to “preserve his patrimony.”

"Our joy has no limit," Monsignor Boulos Nasrallah, of Rahi's archdiocese in Jbeil, north of Beirut, said.

The Synod of bishops gathered in a spiritual conclave in Bkirki last Wednesday in isolation from the outside world to elect the new patriarch. Al-Rai was elected after winning more than two thirds of the votes of the 38 bishops. He is known as a moderate with good relations with all Lebanese factions.

Last month, Pope Benedict XVI accepted the resignation of Sfeir who had said he resigned to allow for a “younger bishop” to assume the responsibility.