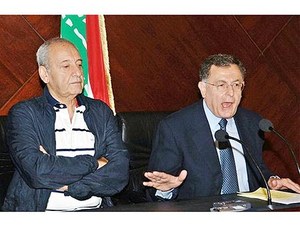 A leaked U.S. Embassy cable published exclusively in Al-Akhbar on Tuesday revealed that former Prime Minister Fouad Saniora held Syria and Iran responsible for the eruption of the July 2006 “because they want to destroy the Lebanese government, obstruct the formation of the Special Tribunal for Lebanon, and divert attention from the Iranian nuclear program.”

The cable, dated July 13, 2006, said that Saniora described Hizbullah’s actions as “unforgivable” expressing his understanding that Israel “will not reward the party” by liberating the Shabaa Farms.

He added that any reward Israel would present would be given to the Lebanese government.

Another cable, dated August 6, 2006, documented a meeting between Saniora, then Foreign Minister Fawzi Salloukh, and ambassadors of nations represented at the U.N. Security Council.

The meeting focused on a resolution on Lebanon being mulled by the international organization.

Then U.S. Ambassador to Lebanon Jeffrey Feltman stated that after Salloukh exited the meeting, Saniora expressed his true sentiments on the resolution, said the cable.

The PM explained that the resolution will serve to return Lebanon under Iran and Syria’s control, adding that throughout the war, he focused on the liberation of the Shabaa Farms, according to Feltman.

He was quoted as saying to the Americans: “You can place it under the U.N.’s authority and let it stay there for a hundred years.”

He added that he believes that the farms “are an Iranian-Syrian fabrication.”

Saniora’s primary concern, said the Wikileaks cable, was reaching a “fair solution that would help the Lebanese and Israeli governments and create a big problem for Hizbullah and its Syrian and Iranian allies.”

His was also concerned with Israel’s ongoing occupation of the Shabaa Farms, saying that its persistence gives Syria an excuse to continue on interfering in Lebanese affairs, said a cable dated August 7, 2006.

A cable dated August 1, 2006, quoted Saniora as informing Feltman that the Lebanese and Israeli governments “are drowning in the details and they are about to lose sight of the main goals of ensuring Israel’s security, achieving peace, and disarming Hizbullah.

In an earlier cable, dated July 28, 2006, Saniora had hoped that Israel would realize that allowing the Lebanese state to impose its authority over the South “is the key to Israel’s security.”

Another cable, dated July 18, 2006, reported the French Ambassador to Lebanon Bernard Emie as saying that the March 14 camp is keen on “Israel clipping Hizbullah’s wings” and that it wants Israel to do the “dirty work.”

The French ambassador doubted that Israel would succeed its mission however.

Emie also voiced fears of the Lebanese army siding with Hizbullah in the war.