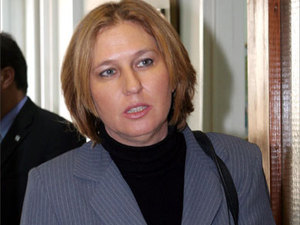 A leaked U.S. Embassy cable published exclusively by Al-Akhbar newspaper on Tuesday revealed that former Israeli Foreign Minister Tzipi Livni had stated that the Israeli government realized that the formation of the Lebanese government at the time was an achievement for the international community.

It believed that the newly formed government headed by then Prime Minister Fouad Saniora is a step forward in the right direction for Lebanon.

She stressed the importance of the implementation of U.N. Security Council resolution 1559, adding that the Israeli government is aware of the Lebanese government’s weakness.

She said that the best way to assist it rested in the international community taking decisions without waiting for a response from Saniora’s Cabinet.

She added in another meeting with Congressman Pete Hoekstra that there are no border disputes or misunderstandings between Lebanon and Israel “seeing as the two countries share the same goal of removing Hizbullah’s arms and allowing Lebanon to impose its complete sovereignty.”

Another leaked cable also published in Al-Akhbar revealed that former Israeli Prime Minister Ehud Olmert was fond of Saniora and that he would have been “happy to meet him any time.”

The cable, which was released during the July 2006 war, also spoke of Olmert’s understanding of the weakness of the Lebanese government which prevents it from apprehending the two kidnapped Israeli soldiers, negotiating on them, and later releasing them.

The July 2006 war was sparked when Hizbullah kidnapped two Israeli soldiers in a cross-border raid.

Another Wikileaks cable revealed that former Israeli former Chief of Staff Gabi Ashkenazi had informed the American ambassador to Israel that Saniora shares the same interests with Israel.

The Israeli official stressed the need for Israel to help Saniora because no one else can guide Lebanon onto the right path.