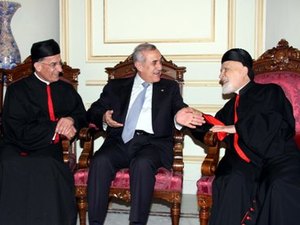 Lebanese leaders welcomed the election of Beshara al-Rahi as the new Maronite Patriarch on Tuesday, hoping he would be successful in keeping Bkirki a place of unity among the Lebanese.

Al-Rahi will be “the best successor to the best predecessor,” President Michel Suleiman said in a statement.

He said he hoped the new leader of the Maronite church would succeed in keeping Bkirki a “place that unites the Lebanese.”

Voice of Lebanon radio station said that Suleiman will visit al-Rahi later in the day to congratulate him on his election.

The election of a new patriarch is a “national event” for all Lebanese sects who consider Bkirki a “slogan to Lebanon’s cultural and humanitarian message to the world and a site of inter-religious dialogue,” Caretaker Premier Saad Hariri said in a statement released by his press office.

Hariri hoped that al-Rahi would “be able to carry out his religious and national responsibilities at this sensitive stage” and would “preserve Lebanon’s unique coexistence and national unity.”

Phalange party leader Amin Gemayel, who was among the first officials to arrive in Bkirki after the announcement of al-Rahi’s election, told reporters that “there was no doubt” the new patriarch “would defend Lebanon’s sovereignty and independence.”

“He is a man of unity,” the former president said.

In comments to his party’s website, Geagea said: “All Christians and mainly Maronites … should support the new patriarch.”