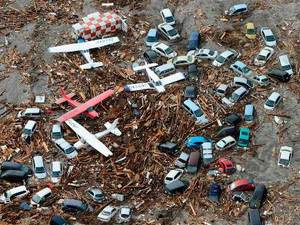 The economic aftershocks from the massive earthquake off the coast of Japan, the resulting tsunami and a feared nuclear meltdown could hit global production of everything from aircraft to iPads.

Panic selling sent Tokyo shares down 10.55 percent on worries the nuclear crisis would become a catastrophe Tuesday, after radiation levels near a quake-stricken nuclear plant surged following explosions and a fire.

With ports, airports, highways and manufacturing plants across Japan shut down, the government has predicted "considerable impact on a wide range of our country's economic activities".

Singapore bank DBS estimated the quake and tsunami would cost Japan's economy $100 billion, equivalent to about two percent of its gross domestic product.

The crisis has led to a huge stock sell-off, with Japanese giants such as Sony and Toyota hit after they were forced to halt production in the country.

Reactor-maker Toshiba, which fell by its 16 percent daily limit Monday, was ask-only.

And the ripples are just beginning to register in the global economy.

Japan manufactures more than 40 percent of the world's electronic components, according to brokerage firm CLSA.

Much of the NAND flash memory, for instance, for Apple's new iPad 2 comes from Toshiba, the tech website Engadget said Monday.

"Already, we're seeing reports predicting shortages of components that could ultimately create delays and/or increase the prices of our favorite gadgets," Engadget wrote.

But a Toshiba spokeswoman told Agence France Presse that only one of its factories, plus its research and development center, were still closed on Tuesday.

There was no suspension in production of NAND memory, she added, as the factory is in a different area far from the quake and tsunami devastation.

Factories, of course, also require raw materials and a working transport network -- all of which pre-supposes the availability of fuel and electricity.

On Monday, authorities put into action plans for rolling power blackouts in areas served by Tokyo Electric Power Co (TEPCO) to make up for the loss of electricity from the country's crippled nuclear plants.

The beleaguered power company said the measures affected an area covering some parts of Tokyo and eight prefectures.

Toyota, the world's biggest automaker, has suspended production at all its plants -- and its subsidiary vehicle manufacturers -- in Japan "from March 14 through March 16", the company said in a statement on its website.

"We continue to place priority on supporting the relief efforts in the regions affected and ensuring that our team members, the employees at subsidiary vehicle manufacturers and at our suppliers -- and all their respective family members -- are safe," the statement added.

Even U.S. plane-maker Boeing said Monday it was assessing the impact of the disaster on aircraft production, warning of a potential supplies crunch if disruptions continued for several weeks.

The Chicago-based aerospace giant relies on Japanese companies for 35 percent of the content of its much-delayed 787 Dreamliner.

Shiro Armstrong, an East Asian economics expert from the Crawford School of Economics and Business at the Australian National University, says Japan's advanced logistics and supply chain infrastructure should help.

"I would say Japan has a better ability to respond because of the lessons it successfully learned during the Kobe earthquake and because it is a very advanced economy," he told AFP, referring to the 1995 disaster that killed more than 6,000 people.

"The infrastructure and response systems were significantly upgraded post-Kobe and you can see that the trains and airports in Tokyo, at least, were operational very soon after the initial shock."