Qassem: Political Life in Lebanon Won’t Come to a Halt with March 14 Camp’s Refusal to Take Part in Cabinet 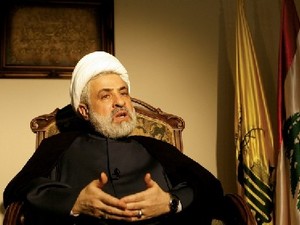 Hizbullah Deputy Secretary General Sheikh Naim Qassem stated on Tuesday that political life in Lebanon will not come to a halt with the March 14 camp’s refusal to take part in the new government.

He said after holding talks with Spanish Ambassador to Lebanon Juan Carlos Gafo and a number of ambassadors from Latin America: “We refuse for political life in Lebanon to be obstructed for the sake of some sides.”

“The Lebanese have the right to a government that rejects corruption and the new Cabinet will stand as the sincerest representation of the merger of the parliamentary and popular majorities,” he stressed.

“The new government will be keen on building a state that will meet the citizens’ interests in a political framework that protects the country from regional and international dependency,” Qassem said.

“The people will clearly see who wants to build the state and those who want to destroy it in their pursuit for power,” he added.