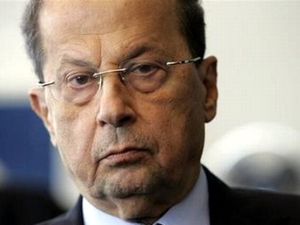 Free Patriotic Movement leader MP Michel Aoun congratulated on Tuesday Beshara Rahi on his election as the new Maronite patriarch, voicing his support to him in his mission.

He said of the March 14 rally after the movement’s weekly meeting: “We tried to understand Sunday’s demonstration and the speeches at the event and we were surprised by the campaign against the arms.”

“Who said we are not committed to the army, but who shut out the army from the budget? Who funded those who killed it in the North? We support the army first and foremost,” he declared.

“God willing the reason to have a resistance will end, but we need it today,” he said.

“They know the size of the square and even if they were a million demonstrators, but what will be the fate of this rally after a month?” the MP asked.

“The March 13 rally’s agenda is doomed to fail,” he stressed.

“We have not yet devised a strong defense strategy and ask the March 14 camp what project they have presented to this country,” he added.

Aoun asked: “Isn’t harming the Resistance, its fighters, and leaders an attempt to spark unrest?”

Addressing the government formation, he said: “I don’t know what progress has been achieved in the formation process and a meeting between Prime Minister-designate Najib Miqati and I has not yet taken place.”

Regarding his recent statements on slain former PM Rafik Hariri, Aoun stated: “There are factors that determine martyrdom and when you find out why Rafik Hariri was assassinated you will decide whether he was a martyr or not.”

Earlier on Tuesday, Aoun criticized the March 14 rally saying that the movement will be short lived and that its slogans against the resistance's arms "lack longevity".

He told As Safir in remarks published on Tuesday: "No matter what caretaker Prime Minister Saad Hariri does, he will realize that he won't achieve anything because he is waging a losing battle."

Addressing his recent statements that former PM Rafik Hariri is a "loss for the Hariri family", Aoun responded that the Mustaqbal movement and its allies "have been accusing us for years of something we haven't done."

"They turned the people against us during the last parliamentary elections under the claim that whoever votes for us is voting for murderers," he said.

"This mentality of assumptions is still ongoing under various guises," the MP continued.