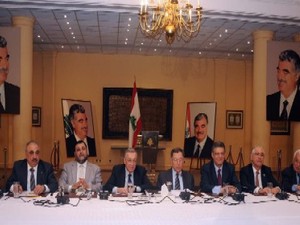 The Mustaqbal parliamentary bloc on Tuesday said that the Lebanese who commemorated Sunday the 6th anniversary of the Cedar Revolution had expressed their "rejection and confrontation against the attempts of terrorization and intimidation and the use of weapons to bully unarmed citizens who want to live in peace under the State's wings."

In a statement issued after its weekly meeting in Qureitem under ex-PM Fouad Saniora, the bloc stressed "the major national stance expressed by the Lebanese on that occasion concerning commitment to resisting Israel and confronting its hostility against Lebanon through the weapons which must be put under the Lebanese State's authority."

On a separate note, the bloc congratulated the Lebanese in general and the Christians and the Maronite sect in particular on the election of Beshara al-Rahi as the 77th Patriarch of Antioch and All the East.