Muallem Confident in March 8 Ability to Form Cabinet, Says he Won’t Take his Jacket Off 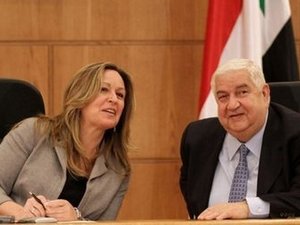 “We don’t interfere in the formation of the Lebanese cabinet. We have confidence in the majority in Lebanon which has enough awareness and absolute faith in Lebanon’s interests,” Muallem said Tuesday during a joint press conference with his Spanish counterpart Trinidad Jimenez.

March 8 “is capable of forming the government,” he stressed in response to a question.

Muallem mocked Caretaker Premier Saad Hariri who removed his jacket and tie at Sunday’s rally at Beirut’s Martyrs Square. “I am not ready to remove my jacket,” the Syrian foreign minister told reporters.

He reiterated Syrian opposition to any "military intervention in the affairs of the region," pointing to the "painful and dangerous" experiences of Iraq, Sudan, Lebanon and Gaza.

"We do not support militarily any of the parties," Muallem said of "rumors and reports of military support" to the Libyan regime and dismissing allegations "Syrian pilots had participated in air strikes on (rebel-held) eastern Libya."