Dozens of Syrians Call for Liberty in Damascus 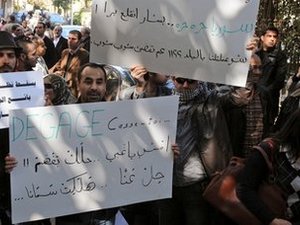 "God, Syria, liberty" and "Syrians, where are you?" chanted men and women inviting their compatriots to join the "peaceful march" which unfolded in a central souk of Old City Damascus, according to videos posted online.

Witnesses and a human rights activist told Agence France Presse five young men near the Omayyad mosque started shouting the slogans, despite a 1963 emergency law that bans demonstrations in Syria.

The young demonstrators marched through landmark souks Al-Hamidiyeh and Hariqa, drawing dozens of other Syrians with them. But security forces broke up the group and arrested two of its members, witnesses said.

Syrian activist Suheir Atassi told the Qatar-based Al-Jazeera satellite television channel that she had been "surprised" by the protest.

"It's the first time a demonstration calling for freedom has taken place in Syria," she said.

"Around 200 people protested. Four young people, one a woman, were arrested."

A Facebook page entitled "The Syrian revolution against Bashar al-Assad 2011," which has amassed about 42,000 fans, had been promoting demonstrations "in all Syrian cities" on March 15.

The organizers, who say they are human rights activists from Syria and Europe with no political affiliation, called for a "revolution until liberty and for justice."

"Let's call for a Syria free of tyranny, emergency law and special tribunals; a Syria without corruption or theft or monopoly of wealth, exempt from poverty and illiteracy; and for a civil state," posted the organizers.

The organizers also took pride that the residents of Qamishli, a city in northeast Syria with a Kurdish majority, protested on March 12 against "corruption and injustice."

Meanwhile, Foreign Minister Walid Muallem said on Tuesday that political reforms would be implemented this year.

"We will take steps towards introducing political reforms this year," he said at a news conference with his visiting Spanish counterpart, Trinidad Jimenez.

Muallem cited a recent interview President Assad gave to The Wall Street Journal in which he outlined "a program of reforms that will begin with (amendments to) laws on municipal and legislative elections."

"The people of this region are the most qualified to decide their destiny," said Muallem who was quoted by the official SANA news agency.

In mid-February, hundreds of Syrians staged a spontaneous protest against security forces after policemen assaulted a young man in Damascus's Old City, the Dubai-based all4Syria reported.

"Syrians will not be humiliated," they chanted.