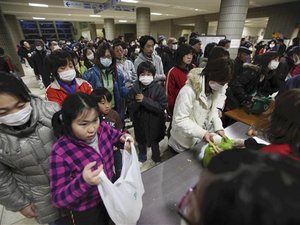 The mayor of a town near Japan's quake-damaged and stricken Fukushima nuclear plant said Wednesday that it desperately needs help for thousands of evacuees sheltered there.

"We have received many people who were evacuated from the area near the plant," Masao Hara, mayor of Koriyama city, about 50 kilometers west of the nuclear plant, told Agence France Presse by telephone.

"Right now some 9,000 people are at shelters in Koriyama," he told AFP, including 200 at a baseball stadium.

"What we urgently need now is fuel, heavy and light oil, water and food. More than anything else, we need fuel because we can't do anything without it. We can't stay warm or work the water pumps," Hara said.

"We also need to move our vehicles to collect garbage. I really would like to appeal to the world: We need help."

More than 200,000 people have been evacuated from a 20-kilometer radius around the power station, which has been rocked by a series of explosions and seen local spikes of radiation at levels damaging to human health.

"People are worried but acting very calmly," said Hara. "They're not in a panic at all. They get more concerned after they watch television and see how anxious the rest of the country is."

About 2,600 people have queued up for radiation scanning at the stadium conducted by doctors wearing anti-radiation suits.

Authorities are also preparing to provide them with iodine pills, a preventative treatment for radiation sickness.

The Fukushima No.1 plant was damaged in Friday's massive quake and tsunami calamity, which killed thousands and left large parts of northern Japan desperately short of water, food, fuel and other basic necessities.