Japanese Emperor: Praying for the Nation 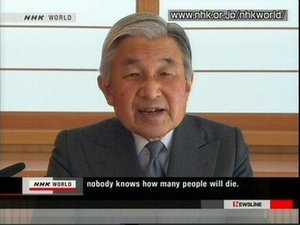 Japan's Emperor Akihito said Wednesday he was praying for the people's safety following last week's deadly earthquake and tsunami, and expressed his deep concern about the escalating nuclear crisis.

In a rare television address to the nation, the 77-year-old monarch -- who is held in deep respect by many Japanese -- admitted the country still did not know how many people had died in the March 11 twin disasters.

He thanked the emergency personnel, both from Japan and abroad, for their efforts to locate the missing, and help survivors battling difficult conditions including increasing cold temperatures in the affected zone.

"The number of people killed is increasing day by day and we do not know how many people have fallen victim," Akihito said.

"I pray for the safety of as many people as possible," he said.

"People are being forced to evacuate in such severe conditions of bitter cold, with shortages of water and fuel... I cannot help praying that rescue work is done swiftly and people's lives get better, even a little."

The toll of the dead and missing from the 9.0-magnitude quake and tsunami that hit Japan's northeast coast has topped 11,000, with 3,676 confirmed dead and 7,558 unaccounted for, the national police agency said Wednesday.

Akihito also said he was "deeply concerned" about the "unpredictable" situation at the quake-damaged Fukushima No.1 nuclear power plant, where the quake knocked out reactor cooling systems. A series of explosions followed.

"I sincerely hope that we can keep the situation from getting worse," Akihito said.

He paid tribute to the military, police and fire department personnel involved in disaster response efforts, as well as national and local governments and rescue teams from abroad.

"I wish to thank them for their rescue efforts around the clock," Akihito said.

"I have received messages of condolence from heads of state of various countries with kind words that their hearts are with the victims. Allow me to convey the words to people in the afflicted areas."

Akihito acceded to the throne in 1989 following the death of his father Emperor Hirohito. As the titular head of state in Japan, he plays a largely ceremonial role.

A spokesman for the Imperial Household Agency said it was the "first time" the emperor had addressed the nation on television in the wake of a natural disaster.

After the earthquake in Kobe in 1995, which killed more than 6,400 people, Akihito issued a written statement.