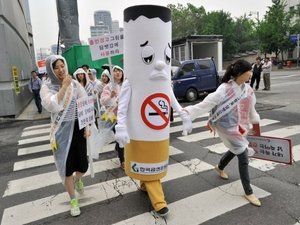 After decades of indifference, big businesses and the government are turning up the heat on smokers in South Korea, a nation with one of the developed world's highest male smoking rates.

Some firms are pressing workers to kick the habit or miss out on promotion and the health ministry will toughen warnings on cigarette packs.

Seoul council plans eventually to make one fifth of the city's total area smoke-free. Even the military is getting in on the act: army draftees undergoing basic training will get advice from a clinic on ways to quit.

But successive national governments -- fearful of an electoral backlash -- have held back from raising the tax on cigarettes.

Some 44.3 percent of South Korean men smoked in 2009, according to the latest available data from the Organization for Economic Cooperation and Development (OECD). This compares to an average among all member nations of 26.5 percent for men.

The smoking rate among Korean women is low due to social taboos.

Samsung Electronics, the country's largest employer, is at the forefront of efforts to cajole workers to quit smoking.

Executives of its Device Solutions (DS) department, which employs 35,000 people out of a total of 101,970 Samsung Electronics staff in Korea, recently called on staffers to join a non-smoking program.

A company spokesman said almost all DS employees had made non-smoking pledges as part of what it called a "well-received" voluntary program.

The department "considers employees as the company's most valuable asset, and their health and well-being are a top priority. The recent smoking cessation program is an extension of that belief," a statement said.

The spokesman said the company as a whole was considering strengthening anti-smoking policies.

"Certain consequences for smokers are under consideration. They haven't been finalized nor enforced," he said, adding smoking could be a factor affecting promotion prospects.

The Woongjin Group, which has wide ranging businesses, has also tightened its policies. It said promotions made in February took smoking into account and all new employees must sign an anti-smoking pledge.

"The announcements were made prior to the promotion process, so there weren't any complaints from those who didn't get promotion," said its spokeswoman.

Woongjin conducts random hair and urine tests on a large number of employees at irregular intervals.

Media reports say some other major companies employ similar tactics, even though they publicly deny pressuring employees. Some employees say they don't object.

"At first, I had negative feelings about the policy because it was too forceful. But as I followed along, I began to think it was good for me," said Che Young-Jin, 31, who recently quit smoking.

Outside the workplace, Seoul city government has banned smoking in plazas and parks and near bus stops and schools. Offenders face a 100,000 won ($86) fine.

"We caught 240 cases last year at main plazas and parks and this year, our 23 officers are going to random spots and catching about three to five smokers every day," said Song Yo-Sang, a manager at the city government.

By 2014, the city plans to make 21 percent of its total area a non-smoking zone. It is considering a blanket ban on smoking in all public areas except for some designated spots.

The health ministry will increase the size of warning messages on cigarette packs from 30 percent of the surface area to 50 percent.

"Two more messages, which are a counseling hotline number and a message that inhalation of tar depends on smoking habits, will be printed with the original message," said Song Myoung-Jun, a ministry deputy director.

The ministry also plans to use graphic warning pictures, such as diseased lungs, on packs although it may take time to amend laws to permit this.

But officials are still hesitant to raise the cigarette tax, the lowest among OECD nations. A pack of Marlboro costs just 2,700 won ($2.31).

Song acknowledged the price was low but said a rise "requires social consensus".

"People shouldn't make smokers look like barbarians when smoking is legal and we pay the rightful amount of taxes," he said, calling on Seoul city to designate public smoking areas.

"Prohibiting smoking is like pushing smokers off the brink and merely shows that they don't care at all about smokers' rights," Hong said.