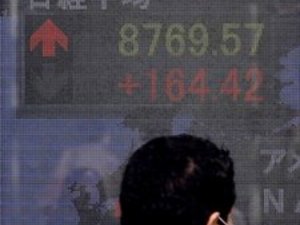 Japanese stocks rebounded Wednesday, recovering some of the massive losses sustained over the last two days following a devastating earthquake and tsunami. Markets around the world also bounced back even as the human and economic toll from the disasters, including an escalating nuclear crisis, remained unclear.

Oil prices rose above $98 a barrel as fears that clashes in Bahrain and Libya could further disrupt crude supplies outweighed concern Japan's crises will crimp demand. In currencies, the dollar was little against the yen and up against the euro.

Japan's benchmark Nikkei 225 index briefly surged more than 6 percent Wednesday. It softened slightly after Japan temporarily suspended operations to prevent a stricken nuclear plant from melting down after a surge in radiation made it too dangerous for workers to remain at the facility. The workers had been dousing reactors at the crippled Fukushima Dai-ichi nuclear complex with seawater in a frantic effort to cool them.

"It is very early days for calculation of any impact on the economy and the stock and bond markets," according to Sarah Williams, head of Japanese equities at London-based Threadneedle, which manages about $65 billion in assets. "Until the safety of these plants is assured, investors will remain cautious."

The Nikkei closed up 5.7 percent at 9,093.72 as investors snapped up bargains after a panic selling sent the index spiraling down nearly 11 percent the day before. The Nikkei on Tuesday closed at its lowest level in almost two years after shedding more than 1,600 points, or 16 percent, over two days.

"I also believe that Japan's experience, knowledge and technologies in the area of recovering from earthquakes should not be underestimated and that the stock market will calm down soon," Saito said.

Meanwhile, the Bank of Japan conducted emergency operations for the third day in a row, bringing its total liquidity injection to 55.6 trillion yen ($688.3 billion) since Monday.

The Shanghai Composite Index gained 1.2 percent to 2,930.80 while the Shenzhen Composite Index rose 1.1 percent to 1,307.96. Gains were led by nonferrous mental and rare earth companies due to huge anticipated demands once rebuilding gets under way in Japan.

"The market will be unstable in the short term and it will relate to the nuclear leak in Japan," said Liu Kan, an analyst at Guoyuan Securities in Shanghai.

Benchmarks in Taiwan, Singapore and New Zealand were also higher.

However, markets in Indonesia and the Philippines — which count on Japan for a relatively large share of their exports — were down. Vietnam and Malaysia also slumped.

Taiwan's TAIEX index recovered some lost ground — up 1.1 percent — after losing 3.4 percent Tuesday. But the index's near-term outlook remained shaky due to extensive trade ties between Taipei and Tokyo.

"Taiwan's trade exposure to Japan is among the highest in the Asia region," DBS Bank Ltd. in Singapore said in a report.

Investors sold stocks primarily because of fear that the disaster in Japan would slow down the global economy. Japan is the world's third-largest economy, manufacturing goods from computer chips to automobiles, and buys 10 percent of U.S. exports.

The dollar had fallen against the Japanese currency in the aftermath of the earthquake as investors bet that Japanese investors would close down overseas bets and bring their money home.

Demand for the yen may keep up as Japan seeks to fund the country's rebuilding. After a huge Japanese earthquake in 1995, the yen gained about 20 percent against the dollar in three months.

Benchmark crude for April delivery was up $1.32 at $98.50 a barrel in electronic trading on the New York Mercantile Exchange. The contract tumbled $4 to $97.18 on Tuesday as the prospect of falling oil demand from Japan sent crude prices down.