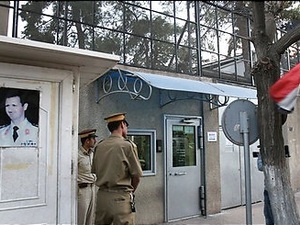 Syrian security forces on Wednesday dispersed a demonstration by dozens of relatives of prisoners near the interior ministry, Agence France Presse correspondents said.

At least four protesters were arrested, the correspondents said, after the demonstrators gathered in a public square near the ministry in central Damascus.

Dozens of supporters of President Bashar al-Assad held a counter-demonstration in the same square, they added.

The families of 21 jailed human rights activists in Syria had announced plans to lobby Interior Minister Saeed Sammur for the release of their relatives, in a statement posted Saturday on the website of the Syrian Observatory for Human Rights.

"We have decided to give the interior minister next Wednesday at noon a letter outlining our complaints and suffering," the families said in the statement posted online.

"After a long wait and rumors of an impending release of prisoners of conscience in Syria, our hopes have vanished," the family added.

The detainees, some of whom have spent several years behind bars, include human rights lawyers Anwar Bunni and Muhannad al-Hassani as well as engineers, doctors and writers.

Rights groups have repeatedly urged Syrian authorities to free "prisoners of conscience" and to "stop using the politics of arbitrary detention against political opponents and civil society activists."

Wednesday's protest came a day after dozens of Syrians demonstrated for liberty and political reforms, according to videos posted on opposition websites and witnesses.

On Tuesday Foreign Minister Walid Muallem said that political reforms would be implemented this year.

"God, Syria, liberty" and "Syrians, where are you?" chanted men and women inviting their compatriots to join a "peaceful march" which set off from the landmark Al-Hamidiyeh souk in Old Damascus, online videos showed.

Witnesses and a human rights activist told AFP five young men near the Omayyad mosque started shouting the slogans, despite a 1963 emergency law that bans demonstrations in Syria.

The young demonstrators marched through Al-Hamidiyeh and the Hariqa souk, drawing dozens of other Syrians with them. But security forces broke up the group and arrested two of its members, witnesses said.

A Facebook page entitled "The Syrian revolution against Bashar al-Assad 2011," which has amassed about 42,000 fans, had been promoting demonstrations "in all Syrian cities" on March 15.

"We will take steps towards introducing political reforms this year," the foreign minister said at a news conference Tuesday with his visiting Spanish counterpart, Trinidad Jimenez.

Muallem cited a recent interview Assad gave to The Wall Street Journal in which he outlined "a program of reforms that will begin with (amendments to) laws on municipal and legislative elections."

"The people of this region are the most qualified to decide their destiny," said Muallem, who was quoted by the official SANA news agency.