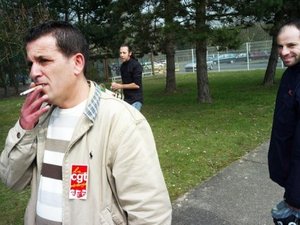 French smokers have formed a lobby to "defend their rights" against what they perceive as unfair curbs imposed by the state, the group's leaders said Sunday.

The Union for the Rights of Adult Smokers (UDFA) says it represents a potential 12.5 million voters and intends to fight against the spread of no-smoking zones or rising cigarette prices.

"We are being barred from cafe terraces, some want to ban us from parks with children, some hotels are non-smoking, soon a smoker won't be able to rent a flat and there's even talk of banning smoking while you drive," she said.

With the first round of France's legislative election on June 10, the new group is hoping to catch the attention of the country's politicians.

Masseron said there were an average of 21,600 smokers in every constituency -- "which is a lot when you know that most MPs are elected by a margin smaller than 500 votes".

According to Masseron, the social cost of smoking is half the amount -- 13.6 billion euros ($17 billion) -- raked in by the state thanks to taxes on tobacco products.