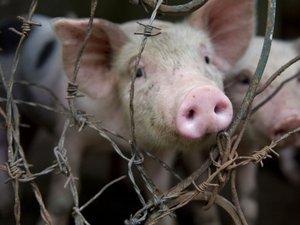 Chile's government has ordered about half a million pigs to be evacuated from a meat processing plant where they were abandoned, prompting locals to riot over foul odors, local media said Saturday.

Residents in the town of Freirina, 800 kilometers (500 miles) north of Santiago in the parched Atacama region, have cut off access roads to the pig slaughterhouse.

Chile has declared a health alert at the plant, where the pigs were dying in large numbers without food, water, cleaning or care until authorities stepped in Tuesday.

Following an investigation, the Chilean government ordered an "indefinite halt to work at the plant," said regional Health Secretary Lilian Sandoval on Friday after informing the company of the decision.

The government also gave plant owner Agrosuper six months to carry out a plan to evacuate the animals.

Sandoval explained that "there was a great slaughter of pigs that caused a source of unhealthy conditions" that the company must resolve the problem before reopening the plant.

Agrosuper said in a statement that it "has all the resources ready to normalize operations," and said that the 463 people working at the plant will not be dismissed.

By late Tuesday, Health Minister Jaime Manalich reached an agreement with protesters to end the road closure and allow Agrosuper workers to enter the plant and feed the swine.

Marches over the foul odor from the dead and dying swine culminated in riots last week, with demonstrators setting two police cars on fire and police arresting protesters.