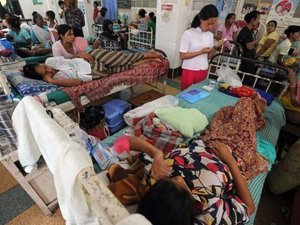 Starved of funds and medicine during decades of military rule, doctors at a clinic in Yangon offer their usual advice to one of Myanmar's newest HIV patients -- come back when you're sicker.

In a country with one of Southeast Asia's biggest armies but a healthcare system in tatters, scarce antiretroviral drugs are given only to those with the advanced form of the illness.

"If I don't get the treatment, I'm worried the disease will get worse," a 47-year-old farmer told Agence France Presse at the clinic run by charity Medecins Sans Frontieres (Doctors Without Borders) after she was diagnosed with the virus.

During almost half a century of military rule which officially ended last year, Myanmar's junta generously funneled cash to the armed forces but presided over one of the world's lowest outlays on public health.

Non-governmental organizations and patients using their own money have scrambled to plug the gap, but with limited success given the scale of demand from the estimated 60 million population.

"Patients are upset, it is difficult to tell them... but we cannot refer them anywhere, the government doesn't have it (medicine) either," said Soe Yadanar, one of four doctors at the clinic in a poor Yangon neighborhood, which has more than 2,000 registered patients.

"We tell them they can come back later. But they know the situation in Myanmar," she added.

MSF says only a third of the 120,000 people living with HIV in Myanmar who under World Health Organization (WHO) standards should receive antiretrovirals are being treated.

The shortage of medicine extends to other serious illnesses including tuberculosis and malaria.

"There are quite a lot of trained doctors but you can have many doctors -- if you don't have the drugs, the paramedicals, the nurses, you still don't get anywhere," he explains.

And while the state press frequently burnishes the government's image as a provider for its people, with pictures of brand-new hospitals, the reality is markedly different.

"I visited a lot of township level hospitals and I'm always struck by the fact that there are a lot of staff but very few patients," says Mike Toole, a public health expert and adviser to the 3MDG Fund, a consortium of international donors to Myanmar.

"Patients just don't go there because they don't get good quality services, there is a lack of equipment, a lack of basic medical supplies, of drugs."

Figures from the WHO show Myanmar spent just $12 per capita (or two percent of GDP) on health in 2009, of which only one dollar came from the government, with the remainder cobbled together by NGOs and patients.

That miserly outlay was matched only by the Democratic Republic of Congo (DRC), a nation ravaged by war and political instability.

In an effort to address the funding crisis, reformist President Thein Sein, whose nominally-civilian government took over from the junta in March 2011, has quadrupled the health budget for 2012-2013.

"It is a good start, but it is coming from a very low base," says Toole. "It will need massive investment... with comparable investment by the government and donors; it would probably take at least 20 years, and possibly 30, to catch up with Thailand."

Donor nations are being urged to take advantage of Myanmar's reforms, and some eased sanctions, to inject cash into its ailing public health services.

But there are fears the reverberations of the global economic crisis may mean donors are reluctant to reach for their wallets.

Whatever the amount offered, NGOs want Myanmar to completely rethink its health system.

Under the junta NGOs were banned from public hospitals and in effect ran a parallel health service, but now they are calling for closer cooperation with the government to extend the reach of healthcare.

"We need to start thinking about a long-term health system where we can all work together," argues de Groote.

In the meantime, many among Myanmar's impoverished population will continue to rely on foreign NGOs for help.

Mying Maung Maung, a 37-year-old carpenter, says he had to turn to MSF when he needed treatment for tuberculosis and HIV.

After several years of antiretroviral treatment, the father-of-four stopped responding to the medicine, in part because he did not stick to the strict timetable of taking his dose.

"I don't have a watch, I had to find clocks... but they always have a different time," he said.