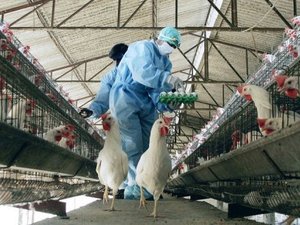 A 10-year-old Cambodian girl has died from bird flu, the World Health Organization said Monday, the country's third fatality from the virulent disease this year.

The child developed a fever and shortness of breath on May 20 and died on Sunday, the WHO said in a joint statement with the Cambodian health ministry.

Hospital tests confirmed she had contracted the H5N1 strain of avian influenza.

"There is evidence of recent deaths among poultry in the village and the patient prepared sick chicken for food prior to becoming sick," the statement said.

The girl, from southwestern Kampong Speu province, is the 21st person in Cambodia to become infected with the H5N1 virus since 2003. Nineteen of those cases have been fatal.

The H5N1 strain has killed 357 people worldwide since 2003, according to WHO statistics.

Concerns about avian influenza have risen in the region with China, Vietnam and Indonesia all reporting deaths from the virus this year.

The virus typically spreads from birds to humans through direct contact, but experts fear it could mutate into a form easily transmissible between humans, with the potential to kill millions in a pandemic.