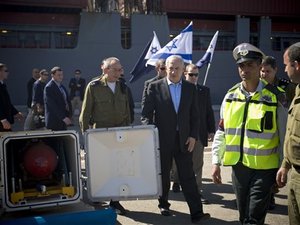 Israeli Prime Minister Benjamin Netanyahu has said that Iran, Syria and Hizbullah “and other terrorist elements” are making daily efforts “to smuggle weapons into Lebanon and Gaza."

Netanyahu made the remark after inspecting a massive shipment of weapons seized from the "Victoria" ship at the Ashdod port in southern Israel.

"All those who question why Israel must stop ... and inspect ships en route to Gaza can find the answer right here in Ashdod," he said. "They were en route to terror organizations in Gaza but their ultimate target was the Israeli civilian population."

Israel said the ship was on its way from Syria with weapons meant for Hamas in Gaza.

Among the weapons on board were advanced anti-ship missiles Israel said could alter the region's balance of power by impeding its ability to enforce a naval blockade of the Hamas-controlled Gaza Strip.

Military officials said Iran possessed the types of weapons found onboard. The military released images of instruction manuals in Farsi and said there were other clues that "explicitly" showed Iranian involvement.(AP-Naharnet)