Jumblat in Damascus on Thursday, Calls for ‘Calm Dialogue’ 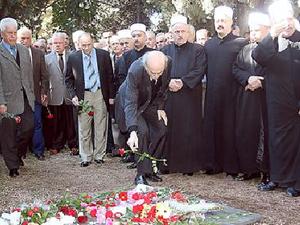 Progressive Socialist Party leader Walid Jumblat is expected to hold talks with the assistant of the Syrian president’s deputy in Damascus on Thursday, As Safir daily reported.

The newspaper said that Jumblat would meet with Maj. Gen. Mohammed Nassif as part of consultations on the situation in Lebanon and the Arab world.

The head of the parliamentary National Struggle Front said Wednesday that the controversial issue of Hizbullah’s arms “can only be resolved through calm dialogue.”

Addressing crowds that flocked to Mukhtara on the 34th anniversary of the assassination of his father Kamal Jumblat, the MP said: “Returning to dialogue is a must, along with protecting gains, sacrifices and principles for the sake of an Arab nationalist Lebanon that confronts Israel.”

Later in the day, Jumblat met at the Riviera hotel in Beirut with hundreds of members of the PSP’s Progressive Youth Organization.

He told the youth that he rejected using weapons domestically “because this destroys national achievements and civil peace.”