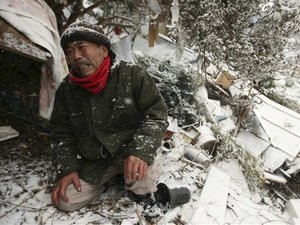 The official number of dead and missing after a devastating earthquake and tsunami that flattened Japan's northeast coast is approaching 15,000, police said Thursday.

The number of confirmed dead from Friday's twin disasters rose to 5,457 while the official number of missing increased to 9,508, the National Police Agency said in its latest update.

A total of 2,409 people were injured in the disaster.

But reports have indicated that the final toll could be much higher.

The mayor of the coastal town of Ishinomaki in Miyagi prefecture said late Wednesday that the number of missing there was likely to hit 10,000, Kyodo News reported.

On Saturday, public broadcaster NHK reported that around 10,000 people were unaccounted for in the port town of Minamisanriku in the same prefecture.

Amid a mass rescue effort there were grim updates indicating severe loss of life along the battered east coast of Honshu Island, where the monster waves destroyed or damaged more than 55,380 homes and other buildings.