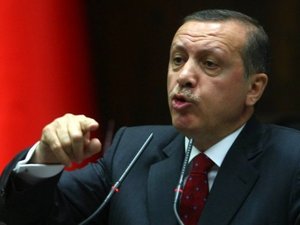 Turkey's Islamist-rooted ruling party is preparing a bill to slash the time limit for abortions, party sources said, after the prime minister triggered outrage for likening abortion to murder.

Abortion has been legal in Turkey since 1983, allowing women to terminate a pregnancy in the first 10 weeks, but under the proposed bill the Justice and Development Party (AKP) wants to drastically reduce the time limit.

"Based on a health ministry report, the abortion limit will be reduced to between four and six weeks, but most probably, it will be four weeks," one party source told Agence France Presse on Tuesday.

Prime Minister Recep Tayyip Erdogan triggered outrage among women's groups and the opposition last week when he likened abortion to murder, saying "You either kill a baby in the mother's womb or you kill it after birth. There's no difference."

He further fanned the flames when he told women's branches of the AKP last weekend that "Every abortion is an Uludere," referring to a botched attack on Kurds by Turkish warplanes in December that claimed the lives of 34 civilians.

Health Minister Recep Akdag has backed the prime minister, saying abortion should not be used as a family planning method, according to Turkish media reports.

"Abortion is cruelty," said Akdag, urging women not to terminate pregnancies unless their health was at risk.

The current law requires women to obtain spousal authorization prior to obtaining an abortion. But the consent requirements are waived if the pregnancy poses an immediate danger to the life of the woman.

Representatives from 300 women organizations protested to the government at a meeting on Monday with Family and Social Policies Minister Fatma Sahin.

Erdogan has repeatedly called on women to have at least three children.

In 2004, his government backed a law criminalizing adultery but later abandoned it after intense pressure from the European Union.