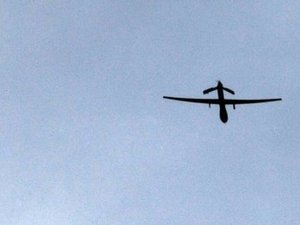 It was the seventh drone strike to hit the lawless region in nine days, as the unpopular covert campaign ramps up along the border and fuels widespread anti-American sentiment in the nuclear nation that is a critical U.S. ally.

The unmanned aircraft operate with the tacit consent of Islamabad but inflame anti-U.S. feeling, which is running particularly high after authorities released a CIA contractor being held for murder on Wednesday.

"Militants were using this house as a training center and used to meet here. They have recovered 24 dead bodies from the debris. We think the death toll may rise," said the official, raising an earlier toll of 12 dead.

He said 10 other militants were critically injured and said those killed were believed to be members of the Pakistani Taliban.

An intelligence official in Miranshah confirmed the new toll.

On Wednesday another strike in Datta Khel killed five militants, according to officials who speak only on condition of anonymity.

Missile attacks doubled in the area last year as the campaign was stepped up, with more than 100 drone strikes killing over 670 people in 2010 compared with 45 strikes that killed 420 in 2009, according to an Agence France Presse tally.

Pakistan says its troops are too overstretched to launch such an assault.

Thursday's attack came a day after a Pakistani court acquitted and freed Raymond Davis, a CIA contractor being held over the lethal shooting of two men in a busy Lahore street in January, sparking small protests across the country.

The spy case had badly hit shaky ties between Washington and Islamabad, as U.S. authorities insisted Davis had diplomatic immunity from prosecution over the deaths and pressed for his release.

$2 million in blood money was finally paid to end the row, fixing a diplomatic rift but causing further resentment among the Pakistani public, who see the covert U.S. drone campaign as a breach of national sovereignty.

The United States does not confirm drone attacks, but its military and the Central Intelligence Agency (CIA) operating in Afghanistan are the only forces that deploy them in the region.

U.S. officials say Pakistan-based militants are helping to escalate the war in Afghanistan, putting up a deadly fight against 140,000 US-led NATO troops there and seeking to bring down the Western-backed government in Kabul.