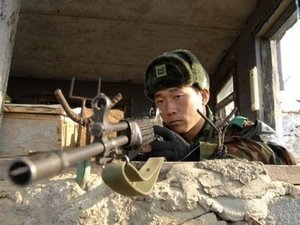 South Korea on Thursday rejected an offer from North Korea to discuss its new nuclear program and return to six-party disarmament talks, saying its neighbor must first show peaceful intentions.

Foreign Minister Kim Sung-Hwan said Pyongyang should demonstrate its commitment to denuclearization "not through words, but through action".

"This (offer) is insufficient and does not fit the position of the (five) other countries that the right conditions should be created," he told reporters.

North Korea had said Tuesday it was willing to return to the six-party forum "without any precondition", and to discuss its new uranium enrichment program and the suspension of nuclear tests.

The offer, made at talks between North Korean officials and visiting Russian envoy Alexei Borodavkin, was seen as a diplomatic concession as international efforts intensified to resume the stalled six-nation talks.

Pyongyang triggered security fears in November when it disclosed an apparently functional uranium enrichment plant to visiting US experts.

The North said it was a peaceful energy project, but experts said the facility could hand Pyongyang a second route to making atomic bombs in addition to its existing plutonium stockpile.

Russia, along with Washington and Tokyo, has backed Seoul's call for the UN Security Council to debate Pyongyang's uranium program.

But China, the North's strong ally, said the uranium program should be handled at the six-party forum.

Grouping the two Koreas, Japan, Russia, the United States and China, the six-party talks have been deadlocked since Pyongyang walked out in April 2009 in protest at UN condemnation of an apparent missile test.

Relations on the Korean peninsula have been icy since the South accused the North of torpedoing a warship in March 2010 near the disputed Yellow Sea border with the loss of 46 lives. Pyongyang denies the charge.

In November the North shelled a South Korean island near the border, killing two marines and two civilians.