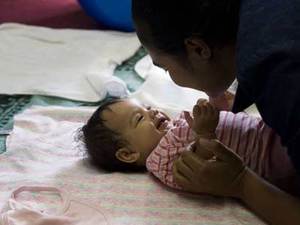 One-year-old Katakane laughs and coos in the arms of her HIV-positive mother as a doctor tries to examine her at South Africa's largest public hospital, in Soweto township.

But it is only a routine check-up. The little girl is healthy thanks to a treatment that has saved thousands of babies born to mothers with the virus that causes AIDS.

Two years ago while she was expecting, Nandi took part in a state health program designed to prevent HIV-positive mothers from infecting their babies with the virus.

The treatment has saved up to 70,000 children every year, according to officials -- a massive success story in a country with almost six million people living with HIV and AIDS and a notorious treatment history.

"If she is HIV-infected, then we do a lot of intensive counseling ... and we offer to give treatment during pregnancy," she said, as children dangled from blue chairs in the research unit, waiting with parents for testing or treatment.

The HIV mothers are given antiretroviral (ARV) drugs during pregnancy and after birth, and possibly an extra dose during labor depending on the virus' progression -- all free of charge.

The medicines reduce the viral load in her body, which in turn reduces the infant's risk of contracting HIV through the umbilical chord or by exposure to the mother's bodily fluids during childbirth or breast feeding.

The newborn also gets a few drops of ARV syrup as an extra boost to fight infection.

The treatment's success has been a boon in a country where half the 50 million residents live on less than $2 a day. While ARV drugs has downgraded AIDS from a deadly to a chronic condition in richer countries, allowing sufferers to carry on a decent lifestyle, the same is not true in poorer countries where survival can be a cruel, daily struggle for proper food and medicine.

Until a decade ago, South Africa had also notoriously resisted giving anti-AIDS drugs to pregnant women. Former president Thabo Mbeki, in power at the time, drew worldwide criticism for his stance challenging whether HIV causes AIDS and questioning Western diagnoses and medicines on how to treat the virus. In 2002, however, the Constitutional Court ordered that antiretroviral be made available, at no cost, to HIV mothers-to-be.

Today, South Africa's ARV program has moved beyond pregnant women and now serves 1.3 million people, the largest program of its kind in the world.

Before the "Prevention of Mother-to-Child-Transmission (PMTCT)" program was launched, almost a third of the country's babies were born with HIV, contracted from their mothers. Infection rates have now dropped to under four percent, according to official figures released last year.

"It's unbelievable how the transmission rates have come down. It's really dramatic," said Theresa Rossouw, the country's chief HIV doctor in the capital Pretoria.

"PMTCT program is a flagship of the South African government. It is something of which they can say, 'We lead this program,'" said Thapelo Maotoe, a doctor with U.S. aid agency USAID, which has put more than $3.3 billion into South African HIV and AIDS treatment since 2004.

The results signal good news in a country where one in two HIV-positive babies -- given widespread poverty -- will still not reach their fifth birthday.

But sometimes the medicines do not work.

The youngest child of Lindiwe (not her real name) was born HIV-negative, but his older brother, three-year-old Siyabonga, contracted the virus despite administration of the drugs.

"Siyabonga is no longer going to have a better life because he's going to grow with this virus. And he's still young, so it's too painful," said the 22-year-old who lives in a corrugated iron house on a dirty road in Soweto.

At times, children may also develop resistance to the ARVs their mothers took during pregnancy but "the advantages of treatment are dramatically higher than the disadvantages," said Rossouw.

And even after birth, babies can still be exposed to the virus through their mother's breast milk.

Since 2010, however, South Africa has advocated that babies be breast fed exclusively for the first few months of life rather than bottle-fed with infant formula, as the mother's milk protects better against diseases or potentially life-threatening diarrhoea, said Rossouw.