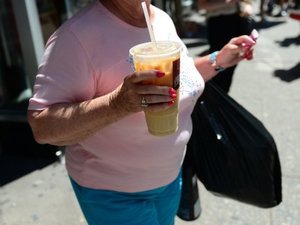 The ban, possibly taking effect by next March, would target what Bloomberg, already a leading crusader for clean living, calls a fatness "epidemic."

"There's an epidemic in this country of people being overweight, bordering on obesity. The percentage of people who are obese is skyrocketing," Bloomberg said in an interview on MSNBC television.

The prohibition, which would not need city council approval, would restrict soda drink servings to no more than 16 ounces. That's more than a normal can, but only half the size of the biggest, bucket-like container that patrons commonly guzzle from in cinemas, sports arenas and other outlets.

The measure would target fast-food and other restaurants, delis, and places of public entertainment like stadiums. It would not cover drinks sold in supermarkets, or any diet, fruit, dairy or alcoholic drinks.

There was an immediate backlash against what Bloomberg critics see as an attempt to turn America's largest city into a nanny state.

Smoking has been banned in Big Apple offices, bars, parks and beaches, while mass transport is plastered with gruesome advertising against unhealthy diets. Artificial trans-fat is also outlawed and all bars and restaurants have been forced to display sanitary inspection grades in their front windows.

"There they go again," the New York City Beverage Association said in a statement.

"The New York City Health Department's unhealthy obsession with attacking soft drinks is again pushing them over the top. The city is not going to address the obesity issue by attacking soda, because soda is not driving the obesity rates," the industry organization said.

"These zealous proposals just distract from the hard work that needs to be done."

But the mayor, a former smoker, was not apologizing. "Sitting around and doing nothing and watching our kids getting fatter and fatter... that's just not something we should do as a society," he said.

He insisted New Yorkers could still down any quantity of sugar-laden drinks, but they would consciously have to buy a second cup.

"We're not taking away anyone's right to do things, we're simply forcing you to understand that you have to make the conscious decision to go from one cup to another cup," the mayor said.

The polarizing idea was first aired in an interview with The New York Times this week, but Thursday marked the start of a publicity blitz. Bloomberg spoke about it at a conference, on television and on Friday was set again to take the message to TV and radio stations.

Former president Bill Clinton, who underwent surgery on a clogged artery in 2010, gave Bloomberg a shout out in an interview on CNN, saying that poor health was also damaging the U.S. economy.

"If you look at the American health care system, spending almost 10 percent of income on health care, that's a big reason people don't get pay raises. Small businesses want to give their employees pay raises, (but) they have to spend it on health care instead. It's killing us," Clinton said.

Keen to counter the snarky comments from some New Yorkers, City Hall even provided journalists late Thursday with a compilation of positive responses from around the country.

The Obesity Society lauded Bloomberg's initiative, stating that "two-thirds of American adults and over half of Canadians are overweight or obese." Former New York mayor Edward Koch said: "I pray it works."